What if: the Sox had re-signed Jason Bay?

Share All sharing options for: What if: the Sox had re-signed Jason Bay?

With all the injury issues that plagued the Boston Red Sox this year, perhaps nothing wreaked more havoc on the roster than the outfield woes which deprived the team of the services of Jacoby Ellsbury and Mike Cameron for most of the year, leaving them instead to fill the void with a seemingly endless cavalcade of part-timers. Instead of having one of the best all-around defenders in Cameron and speedster extraordinare Ellsbury, left and center field were patrolled by the likes of Bill Hall, Darnell McDonald, Daniel Nava, Josh Reddick, and Ryan Kalish.

Although at times it seemed like the Sox could have more easily avoided the comedy of errors that occasionally passed for its outfield by hiring random beer-imbibing fans from the bleachers, there was an option that many Sox fans were clamoring for the previous off-season: Jason Bay. After all, this was the guy that hit 36 HR with 119 RBI and a robust 0.921 OPS, and even flashed a bit of speed with 13 swipes in 16 chances. Okay, sure, his bat disappeared for most of June and July, but all the signs were that he would patrol the Sox’s left field for the next few years. It later surfaced, of course, that the Sox rescinded the original offer once doubts were raised about Bay’s knees to survive a four-year contract. The Sox then reduced the deal to two years, after which Bay secured the four-year, $66 million deal he was looking for with the Mets.

Of course, Bay's deal meant trading the tasty Green Monster, over which many a tater destined for the parking lot or possibly New Hampshire was launched, for the less hitter-friendly confines of Citi Field (the less failtastic of the new Big Apple ballparks). When the deal was first announced, many of us in Red Sox nation assumed that Bay's statistics would suffer as a result. However, with all the injury woes, the thought might have occurred that re-signing Bay could have been a potential solution, although this plan also requires the assumption that he wouldn't be broken by Adrian Beltre.

So let's take a ride in the "What If" machine and find out what could have been if Boston continued to be the new Bay area.

A thing of beauty, that. While there might be a touch too many strikeouts, you'll probably take it in exchange for an OBP of almost .400, right? But let’s hold off on drilling down for a moment. Next, let’s look at Bay’s line from 2010:

But the most distressing number is the games played count—just 95 games out of 162. How did that happen? After all, Bay is notorious for playing through conditions when most other players would have opted to take the day off. (As noted by Terry Francona, Bay has a stubbornness streak that makes Monte Python's Black Knight and Boxer from Animal Farm look like slackers.) So, what kept Bay out of the lineup for so long? Well, it seems that in late July the injury bug that decimated the 2010 Red Sox got as bored as a MMA fan watching a Jane Austen adaptation, and decided to start taking out members of the 2009 Red Sox just for kicks. Bay ran into a wall at Dodger Stadium trying to run down a fly ball, suffering a whiplash-induced concussion. Although he finished out the series, he developed symptoms while flying out of town, and didn't return to the field in 2010.

But what about all those other drops: HR’s down from 36 to just 6, walks down about 25%, and OPS down from .921 to a pedestrian 0.749, with both "O" and "S" taking hits. Is that just the cavernous dimensions of Citi Field coming back to haunt the Mets? Well, not really. Something else was at work here. Here are Bay’s spray charts from 2009 and 2010. 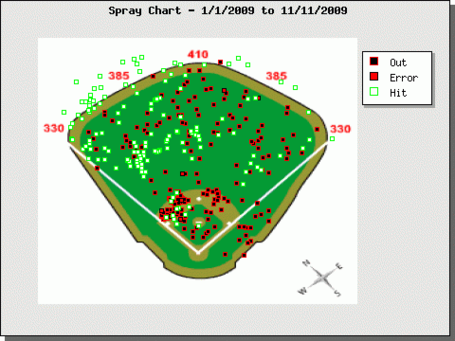 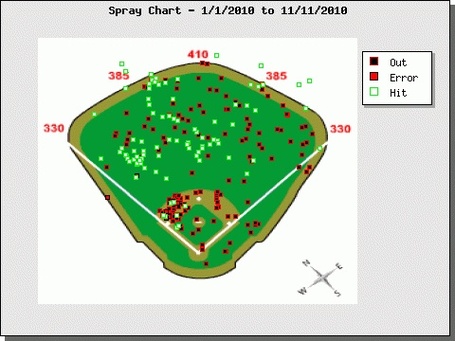 Notice anything missing in that second chart? Like all those pretty green boxes outside of the diagram, representing all the HR's to left? Yeah, it's awfully hard to miss. So it looks like Bay’s power to left field—his primary HR source in 2009—more or less vanished throughout all of 2010. It didn’t matter a whit that Citi Field’s left field is bigger than Fenway; he wasn’t hitting the balls hard enough to left to get them out even at Fenway. My working hypothesis is that Bay was playing hurt in 2010. Moreover, I suspect that this was a problem that plagued him for part of 2009 as well. Look at his spray chart for the months of June and July that year: 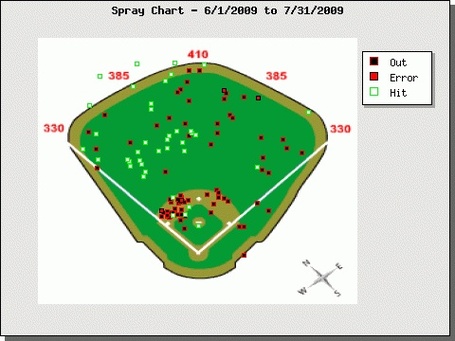 Notice once more the almost total lack of power to reach deep left, while line drives seem to be more or less unaffected. Even if we assume that the concussion wouldn’t have happened if he had played for the Sox in 2010, and he had managed to play almost a full season, the Sox would not have gotten the 2009 edition of Jason Bay, Instead, we would have gotten a player eerily reminiscent of this:

While you can get away with this kind of production if you're a shortstop making league minimum or a combination of rookies and role-players, it’s really not acceptable value from a guy with a $66 million contract who also happens to be a weak defensive LF.

Ultimately, this is another example of the best deal being the one not made: I don’t think the Sox’s fortunes would have improved much with Bay in lieu of Cameron. While there might have been more stability in the roster, there wouldn’t have been a huge overall jump in production.