How much offense will the addition of Mike Cameron instead of Jason Bay cost the Sox?

Share All sharing options for: How much offense will the addition of Mike Cameron instead of Jason Bay cost the Sox?

Much ado has been made of what a significant contribution Mike Cameron will bring to the Red Sox defensively- between him moving to center and Ellsbury moving to left, the Red Sox will have pretty definitively one of the best defensive outfields in baseball.

Despite this significant addition, there are still those who do not believe that this difficult to measure defensive improvement will be enough to make up for the power that Jason Bay brought to the team in left field.  Certainly, Cameron's career line of .250/.340/.448 doesn't look like much when stacked up to Bay's .280/.376/.519, however the fact also remains that Cameron will now be playing 81 games a year at Fenway Park, which may be much better suited to his hitting style- let's look at some of the facts after the jump-

Recently, there has also been a lot of discussion about Adrian Beltre and how he should improve at Fenway.  Some people believe that as a righty with the Monster, he should rake at Fenway, but further analysis shows that Beltre is really great at hitting with power to all fields- which will serve him very well in a lot of different parks.  Cameron, however, IS that dead pull hitter who should see his numbers dramatically improve at Fenway. 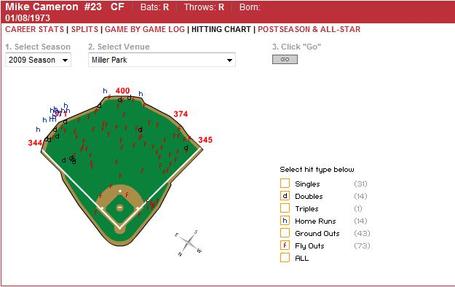 Now the first obvious thing is that he is a TRUE pull hitter.  He hits to the left side with a lot of power- enough power that it looks like about half of the 14 doubles he hit at home last year would be homers, in addition to a few flyouts.  Perhaps even more importantly, he's probably got a good 10 flyouts which would be turned into doubles with his speed on the  basepaths.  More than almost anyone else, this seems like a hitter made to play at Fenway Park.  Certainly we won't see MVP type numbers for him, but from a many who typically hits 20-25 homers a year, it shouldn't be remotely unreasonable to expect something more like 25-30 in 2010, as well as seeing his batting average at home improve a fairly significant amount.  Still, he strikes out quite a bit (though less than Bay), but he has always known how to take a walk, which he probably won't be losing anytime soon by joining a very patient Red Sox lineup.

In addition to this, while his hits for power all uniformly all to the left, he singles to all fields (something which Bay rarely did), meaning that he will keep the entire field on their toes- they can't all cheat too far to the left, because in those situations, he's very capable of singling into shallow right for example.

Overall, yes, he is an offensive downgrade from Bay, but should only be a slight one and I wouldn't be surprised to see him perform pretty much just as well at Fenway.  Combined with his superior defense, the change from Bay to Cameron (for a shorter time period and less money per year) should be considered an absolute steal for the Front Office.