Okay, there's not a lot there to like. I mean, he did get some good results - strikeouts, only 1 walk, good groundball/flyball ratio. Of course, we need to look past the results, and into the process - and that's what Pitch F/X is here for. So let's dive right in.

Not great velocity or differential, but that isn't exactly Bowden's game.  He did throw a LOT of fastballs - and not for a lot of strikes either. Very few swinging strikes is an indication that his stuff wasn't fooling many batters.

Now let's look at the pretty graphs - after the jump, of course. 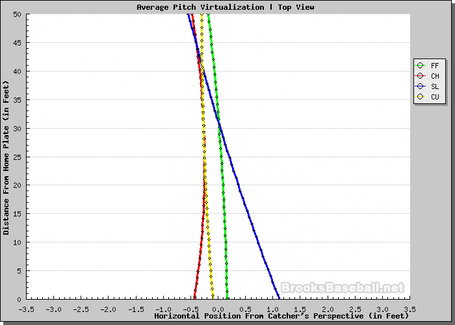 Good tailing action on his changeup (which got rocketed by Hill in the first inning). Pretty straight curveball and lots of break on the slider. Now for the side view: 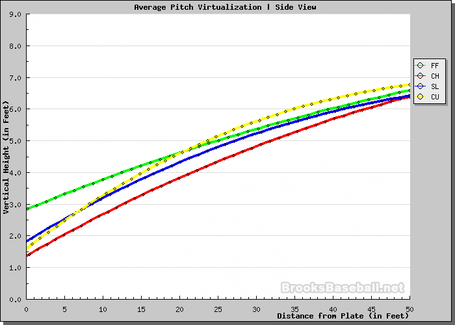 The changeup drops about a foot and a half, as does the curve and slider. The latter takes longer to seperate from the fastball, while the curveball starts above the fastball and falls sharply before crossing the plate.

Even though Bowden didn't throw a lot of pitches, we still got to see how he did after throwing a lot of pitches with little time to recover inbetween. His velocity didn't seem to drop too much, looking at this graph: 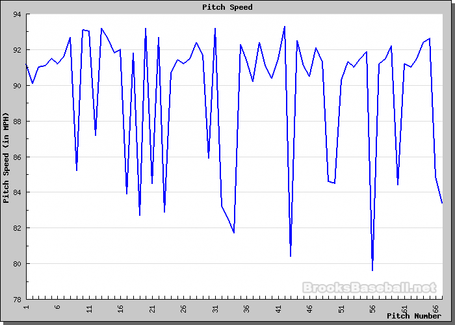 Of course, that's not exactly the clearest picture of his stamina, since it doesn't show what each pitch was. This one does though: 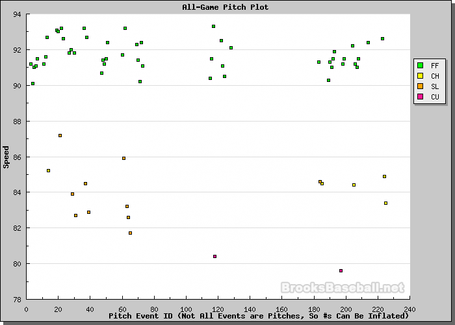 His fastball kept it's velocity up consistently; none of his other pitches dropped much either. So he's a healthy young buck. 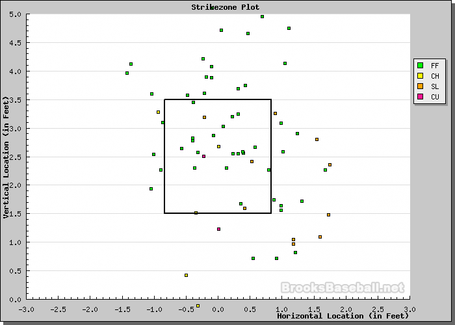 Wow... So, umm.... That's a lot of fastballs up and gloveside. There's also a grouping in the middle of the zone , which isn't exactly a safe spot. Perhaps there's some trends in the batter's handedness. 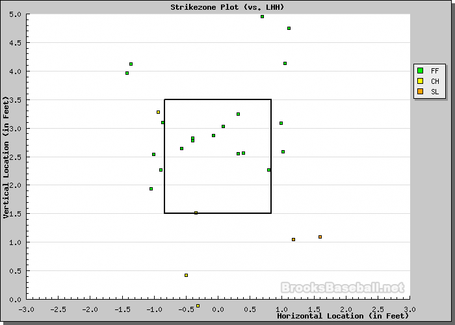 Stayed away from lefties, mostly. He did have a couple sliders that came into batter's knees, and the only changeup was up and away. 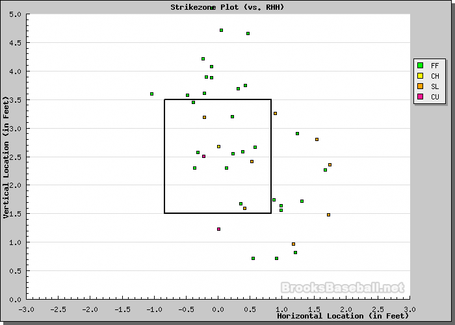 Stayed away a LOT more from the righties - odd, considering the common logic of matching hands with the batter for a better matchup. The curveballs were mostly away, but there were a couple in the middle of the zone. Oh, and I'd wager that single yellow dot in the middle of the zone was the one Hill crushed. Lots of high fastballs isn't a good sign either, although the grouping down and away probably helped the groundball numbers. 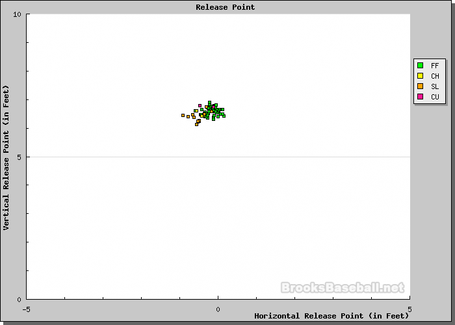 The sliders came out a bit further than the rest of the pitches - might be the product of the grip and his delivery. 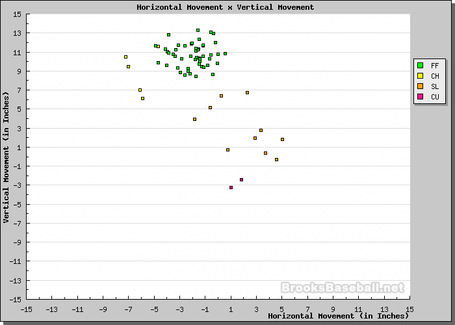 And now the stuff graph. The changeups move a lot more horizontally than the fastball, which we saw was straight as an arrow. The curves don't move a lot horizontally either, making it the text book example of a 12-6 change. It definitely seems like he needs to add some more horizontal stuff - perhaps a mechanics change could facilitate that?