Sandy was right: "Dice-K will return, and he will be very good." Now, he didn't get much more specific than that, but I'm going to guess he wouldn't have guessed that Dice-K would go 6 innings, allowing 3 hits and 3 walks while striking out 5 and not allowing a single run. But those are just the results - let's look at how Dice-K actually pitched.

Okay, I lied, there's going to be something else first, before the graphs; since the last time I did one of these posts, it appears that Brooks Baseball added some very useful information on Swinging Strikes, which usually indicate how well the batters were seeing the pitcher's stuff, and if the number of K's is a good indicator of his performance.

Now, if I gave everyone guess as to what Dice-K's strikeout pitch was tonight, I'd wager that most people wouldn't get it right: it was his 4 seam fastball, which racked up 5 swinging strikes, or roughly 9% of the lasers he fired. No other pitch managed to fool the hitters as much though - in fact, he didn't manage to get a single swinging strike using any other pitch.

Perhaps it was the way he used the pitches - he threw 55 four seam fastballs (33 for strikes), in addition to 17 two seam or cut fastballs (12 for strikes). Hopefully this was just a case of Tek not having a lot of time to meet with Dice-K, and they'll work on mixing his pitches a little more. These weren't the only problems Dice-K had though, but we'll look at those later.

First though, we'll take a quick look at his pitch tracks: 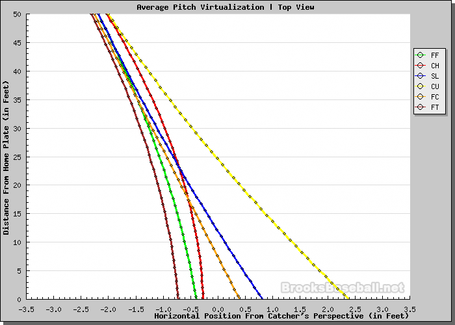 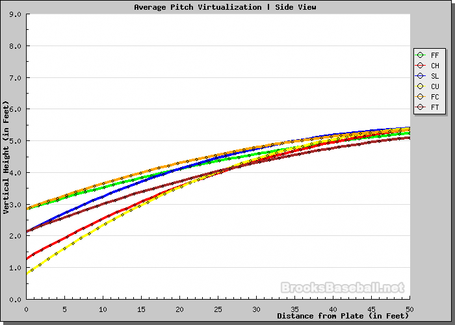 It appears the cutter was his velocity pitch on the glove side of the plate, while he stayed arm side with his 4 seam and 2 seam fastballs. The curveball trajectory may not be reliable, as Brooks only picked up two pitches as curves (more on that in a second). From the side, his 2 seam looks like a 4 seam with a little less "rise", while the slider drops off from the 4 seam trajectory much later and reaches the same separation by the time it crosses the plate. The cutter looks just like a 4 seam, but it didn't tail. That changeup is just plain nasty - it makes huge breaks from the fastball track, but still manages to have a good tail to it.
Now that we've looked at what the pitches looked like to our eyes, let's see how much they fooled physics with spinning: 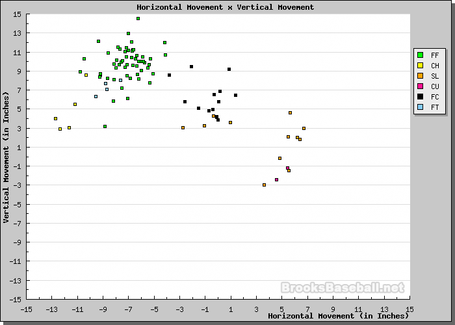 Oh, wow. Those pitches are not very separated at all. Looks like Dice-K's stuff was all over the place - there's a changeup in the fastballs, the cutters varied from looking like a 4 seam to mixing with sliders, and the curves are sitting in the sliders. The first might be explainable by these graphs: 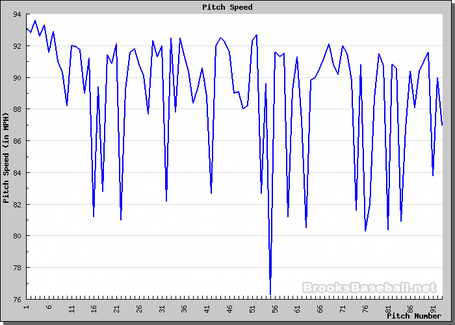 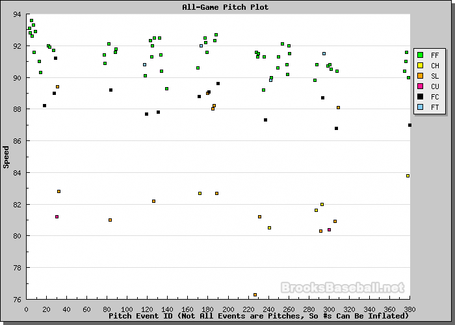 Looks to me like he started losing a little velocity towards the end of his outing - might have been a great time to pull him. There's no changeup that could have been a fastball though, so there's no reason I can find for why that one pitch moved like a 4 seam fastball. Another thing I noticed - his sliders seemed to have two levels of velocity, which makes the 2 identified curves seem a little low - some of those slow sliders were probably curves, in other words.
Most of us were concerned with Dice-K's ability to work the zone, and he did a decent job of it: 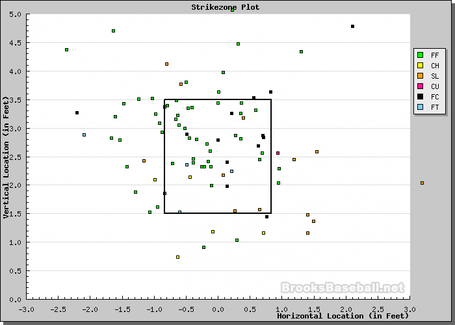 He lost control of or threw a few too many junk pitches for my liking, and he was putting a lot of 4 seam fastballs in the middle of the zone. Other than that, it looks like he did a good job of getting the edge with his pitches.
Last graph - the promised release points plot: 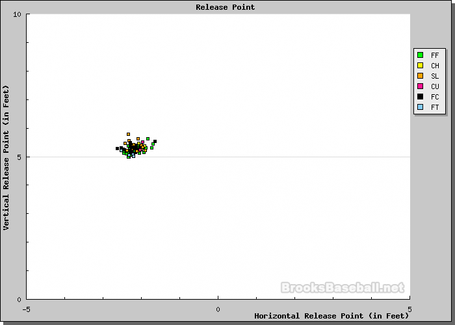 Looks pretty well together, with a few pitches coming out weirdly. Should come together more with more repetition, now that he's going to be getting consistent starts.

Overall, a good outing, with some concerns. Namely, the slight drop in velocity, the odd movement on some pitches, and the random control loss. All of those should resolve themselves with more time on the mound, and we should have a solid 4 man rotation heading into October. Speaking of which...

Pulling away in the first, clawing back into the second, and now we may have found our #4 pitcher? The Sox' lives may have just gotten a lot easier. Oh, and the MFY got into a fight tonight - cool.