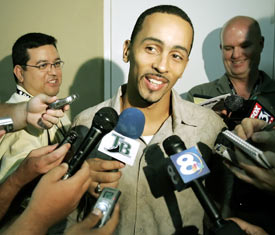 Despite his non-selection to the All-Star Game, Julio Lugo defiantly vowed to fight on yesterday, as protests engulfed the nation, image via philadelphia.phillies.mlb.com

Story by the Aggravated Press


Boston, MA - Police clashed with red-clad protesters who filled the streets Monday night to protest the announcement of the 2009 All-Star Game selections. Massachusetts declared a state of emergency, as national guard units were put on alert in case of further disturbances.

Julio Lugo, World Series hero and one of the most beloved players in Red Sox history, was not selected to the All-Star Game, generating instant anger among the Sox faithful. Furthermore, allegations of electoral malfeasance incensed democracy advocates in the fledgling Red Sox Nation.

Chants of "Hey Hey! Ho ho! No to Jeter, Play Lugo!" and "No Lugo, No Peace!" soared over the warm summer air as thousands marched along from the Massachusetts State House on Beacon Hill to Fenway Park.

Speaking to the crowds, Lugo defiantly urged the protesters to continue their activism.

"It is time to reclaim our nation, starting with St. Louis," he thundered, to enormous applause. "We will spread the Lugovarian Revolution and sweep out the old guard."

"Si se puede!" he chanted with the crowd.

The protests were fueled by accusations of widespread election fraud. According to reports from Lugo's campaign, the All-Star Game selections were announced before all polling stations were closed.

International observers were barred from monitoring the elections. Angela Nonimus of the Carter Center, a  non-governmental organization that promotes democracy around the world, stated that MLB expelled the center's monitors in advance of the contentious elections.

"The selection process was fair and democratic. These Red Sox fans are the pawns of foreign agents seeking to destabilize the Baseball Republic," Selig said, his long robe billowing behind him under the glow of Times Square. "Insurrection against the Sport will not be tolerated."

Still, the questions will not go away.

"It is shocking that not one All-Star Game vote was cast for Lugo in Boston, his team's home city," said Nonimus. "Indeed, in Boston and around the country, Julio Lugo did not even appear on many All-Star Ballots. Even in his home town of Barahona in the Dominican, not one vote was cast for him.

As in past electoral contests, Florida is at the forefront of controversy. "Selig would have us believe that Floridians were voting for Ben Zobrist and Evan Longoria by the boatload," said Nonimus. "I've been to Florida. There aren't enough baseball fans in that state to fill a stadium, let alone elect those two by such wide margins."

Lugo, riding on the shoulders of his adoring and devoted fans, had a ready explanation for this. "The All-Star Ballot is a conspiracy by those with power to keep power."

"Look at the players who were supposedly chosen by the people. All of them already have power. Mark Teixeira, 20 home runs; Evan Longoria, 16 homers; Ben Zobrist, 16 home runs; even local guys Jason Bay and Youkilis have double-digit home run figures.

"I represent the hard-working campesino from Brookline, or the factory worker from Cambridge. Those guys don't have power, yet their voices matter just as much as any steroid-addled slugger. They need someone to speak for them, to bat for them, to walk for them and even to hit into a double play for them."

With all the chaos around the country and internet, it was difficult to get other opinions on the selections. Inquiries were made to Draysbay.com, a premier Rays fan site with an emphasis on baseball statistics. When asked why Lugo was not selected for the All-Star Game, respondents either laughed incredulously at this reporter, or launched into incomprehensible rants full of exotic acronyms which went way above his high-school education and forty years of sports-writing.

In addition, calls to opponents of Lugo's campaign at HalosHeaven.com were never made, due to this reporter's flagrant East Coast bias.

[/Satire] [/Not Actual News] [/If you take this post seriously, I have an Afghan Navy to sell you]