Share All sharing options for: How to be a Yankee Fan, Vol. 2

On December 29, 2008, your world changed forever. A single book, which you ratcheted to the top of the New York Times bestsellers list,* upended everything you knew about sports. You read it in Hardcover, Paperback, Audiobook, Kindle and in documents illegally downloaded from Torrents. And it was good.

But now, prepare to have your world blown up again, because I am proud to announce... for the first time... the Official Sequel to the "award-winning" JETER GOOD! A-ROD BAD!
...

JETER BETTER! A-ROD BADDER!: How to be a Yankee Fan, With a Vengeance

That's right folks! There's a SEQUEL to the mercurial, magisterial learning material. In secret development for over five months, the long-awaited book was the subject of much speculation. See here:

Joe Morgan: "Since it's a book, and it's about baseball, it must have been written by Billy Beane. I don't know why he writes books when he should be managing his team. I hear he's actually a computer sent back in time to kill the sport of baseball through intelligence. That's why I don't read books..."

Thankfully, none of the speculation could top the REAL DEAL. Over the Monster Publishing is proud to present, an E.Coli Production of Epic Magnitude:

JETER BETTER! A-ROD BADDER!: How to be a Yankee Fan, With a Vengeance

"Hold on," you skeptically say, "How do I know it is as awesome as I think it is?"
"And if it is that awesome, can my beleaguered brain even handle so much raw, concentrated awesomeness?"

Well, worry no more, because right now you will get to sample an ENTIRE CHAPTER of my new book, ABSOLUTELY FREE! 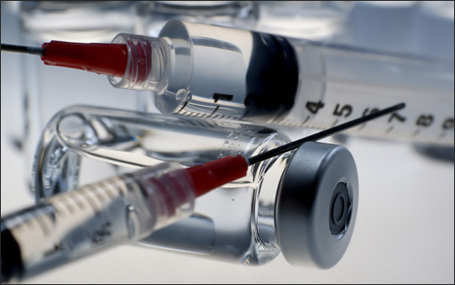 You may have heard something about steroids the past couple years. As a TRUE YANKEE Fan, you don't have access to much information, beyond ESPN and the NEW YORK POST. [New York has some other paper, but I blocked it out of my mind when it endorsed a 2003 Red Sox-Cubs World Series.] In any event, you probably don't know a whole lot about steroids. Which is good, because whatever you THINK you know about them is WRONG.

Let me tell you the TRUTH about steroids... They're bad. But that's good, because NO ONE ON THE YANKEES EVER USED THEM. This is the first rule of Yankee steroid use: You don't talk about Yankee steroid use. It's also the second rule (and yes, I do look like Brad Pitt in real life). This makes perfect sense, because, really, how much can you say about something that doesn't exist?^

"But E.Coli," you say, squealing like Jeter on a shoe-shopping spree, "What about all of stories I heard about Yankees on the juice, the clear or the cream?"

LIES. All of them. The modern sports media is a vast Red conspiracy. And by 'Red,' I mean Red Sox. John Henry, Peter Gammons, the New York Times company, SBNation, the Unitarian Church. It's all tied together. [For more details on this mind-blowing Red Sox menace, see my forthcoming action thriller books, The DaJeter Code and A-Rod and Demons, available soon.]

My editor tells me I'm running out space, and also that I should clean his cage and feed him, but I have just enough pages to share the FIVE CRYSTAL CLEAR RULES OF STEROIDS:

1. NO ONE ON THE YANKEES EVER USED STEROIDS.

Sheffield just has anger issues. Pettitte and Roger just like sticking needles in each others' butts, but they were filled with sugar water ('they' being the needles, not the players.. I think). Jason Giambi just apologized for no reason, because he's such a cultured, sensitive individual.

2. NO ONE ON THE YANKEES EVER USED STEROIDS.

A-Rod, the Infidel, Deceiver of men, and seducer of women, didn't technically use steroids. I say technically, because if you look at him under a microscope, he actually IS A STEROID. A walking, talking testosterone time-bomb, complete with purple-lipped, mirror-kissing masking agent (alibis sold separately). By playing him on the field, the Yankees aren't using steroids, because A-Rod never actually HELPS THEM WIN.

Duh, obvious.... But here come the two most important parts:

4. EVERYONE WHO DOESN'T PLAY ON THE YANKEES IS A POSSIBLE STEROID USER.

5. EVERYONE WHO PLAYS ON THE RED SOX, ESPECIALLY ANYONE WITHOUT ANY EVIDENCE OR SUSPICION OF USE, IS A STEROID USER.

Ortiz has a big head. Varitek - just look at the size of his legs. Dustin Pedroia - he's actually 6'8'' and 250 pounds, but the Sox use CGI graphics to make him look tiny. Ellsbury = Speed. Dice-K's bouts of wildness = steroids. Beckett has no blisters; must be steroids. Jason Bay = Canadian steroids, eh? Julio Lugo would have a batting average in the imaginary numbers [Square root of -1] if not for steroids. Manny - do I even need to bother explaining? Pedro = steroids always wore off by the 8th inning. Ted Williams used artificial human growth hormone, despite it not being invented yet (he was just that evil). Babe Ruth - juicer, until the Yankees cleaned him up. Wade Boggs - what drug wasn't he on?

Having read just that small sample, you are undoubtedly reaching for your phones this very instant.

But wait! Act now and we'll throw in an unheard-of offer. Buy Jeter Better! A-Rod Badder, and we'll give you the complete DEREK JETER HEPTALOGY!!!!1 That's right, for the price of one book, you'll get EIGHT! This tender, heart-warming collection tells of a young boy as he comes of age and grows into the man he will become. The collection includes: