Sox-O's Game 1 Postgame, or: How I Learned to Stop Worrying and Love the Chart

Share All sharing options for: Sox-O's Game 1 Postgame, or: How I Learned to Stop Worrying and Love the Chart 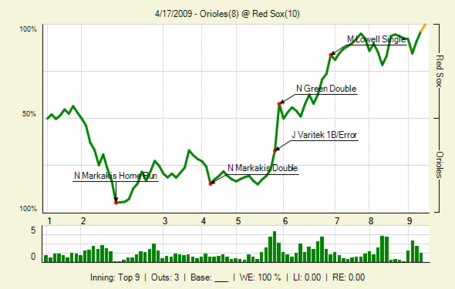 I was going to astound you with my poetic, lyrical, free-wheeling retelling of the game, but no words can capture the magnificence that this chart conjures. What you're looking at is each team's respective odds to win the game. After Nick Mar-KickAss hit a grand slam off of Brad Penny in the top of the second, the Sox had a miniscule chance of coming back. However, unlikely comebacks are not so unlikely against recent Orioles teams, especially when Jeremy Guthrie starts and Danys Baez relieves (see Mother's Day Miracle, The).

Hopefully this is a sign that our hitters are heating up. Particularly encouraging:

In other news, Javier Lopez can't get lefties out. He came up to face two lefties (Kickass Markakis and Huff the Magic Dragon), walked the first and gave up a hit to the second.

Also, Big Papi is really struggling: .158 / .261 / .184 for a hitter of his talent is atrocious. Finally, our starting pitching sucked again. Brad Penny looked great in the first inning and then just completely lost it (abetted by terrible, inconsistent umpiring), pitching three plus innings and allowing all 8 Orioles runs.

Great win, great chart, bad fundamentals. This is still a team misfiring on many cylinders, but maybe they're good enough to beat the Orioles in this series. We'll see how they fare tonight, when Josh Beckett goes against Adam Eaton.