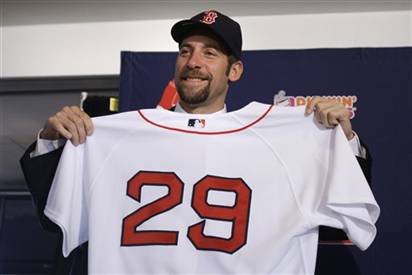 The impact of a down economy has been felt throughout the MLB, there's no denying that. The Red Sox however, are attempting to use that to their advantage. With signings like Brad Penny, Takashi Saito and John Smoltz, Boston is looking to potentially add "All-Star" type depth to their roster without having to lock up millions of dollars in guaranteed contract money. Teams like the New York Yankees, despite recently constructing a new stadium, have opted to go with a different approach. During the off-season, the Yankees poured millions upon millions of dollars in high priced free agents (C.C. Sabathia, A.J. Burnett and Mark Teixiera), but is that really the best strategy at this point? With the additions of Brad Penny, John Smoltz and Takashi Saito, the Red Sox may have had arguably had one of the most productive off-seasons in all of baseball for very little in guaranteed contract money.

30 year old Brad Penny was signed to a one-year $5 million dollar contract, with incentives that could increase the value of the contract up to $8 million. Penny, an All-Star in 2006 and 2007, has been impressive thus far in Spring Training posting a 1-0 record with a 2.57 ERA after 7 innings pitched. The 6'4" right hander won a World Series in 2003 as a member of the Florida Marlins, going 2-0 with a 2.19 ERA in his two starts against the New York Yankees. With his veteran presence, Penny could be invaluable to the Red Sox pitching staff. It would be hard to find another back-end starter as efficient as Penny if he can regain the form that saw him go 16-4 in 2007 with a 3.03 ERA (Finished 3rd in Cy Young voting, voted to All-Star team). This could be a tremendous value signing for the Sox in 2009.

Right handed relief specialist Takashi Saito was signed to a one-year deal with $1.5 million guaranteed (Including a club option for 2010). However, his contract is heavily laden with incentives. Saito will earn an additional $1 million if he appears on the active roster at any point during the 2009 season, as well as $500,000 for every 30 days spent on the active roster. Overall, the contract is potentially worth $15 million dollars. Saito has never had an ERA above 2.49 in his three years as a major league pitcher, all as a member of the Los Angeles Dodgers. The Japanese born pitcher has been brilliant this spring only allowing two earned runs in his nine innings pitched. If Saito can return to his All-Star form, he should be an essential part of what is already considered one of the best bull-pens in all of baseball.

The Red Sox signed Smoltz to a one-year $5.5 million dollar deal with incentives that could push the total salary to upwards of $10.5 million. The incentives in Smoltz's contract include $125,000 for his first day on the active roster, $500,000 if he is featured on the active roster come the last day of the regular season and up to $4.375 million dollars in additional incentives relating to the number of days that he appears on the active roster in 2009. The 20 year veteran is coming off shoulder surgery that will keep him out till at least May. However, Smoltz is already contributing to the Red Sox rotation, providing a mentor for young Clay Buchholz. Buchholz has been dominant this spring, and credits much of his confidence and success to Smoltz's tutelage. Smoltz won the Cy Young award in 1996 with Atlanta (24-8, 2.94 ERA) and has been voted to the All-Star game on eight separate occasions. The established veteran is limited to bull-pen side sessions at the moment, but if he can contribute on the level Braves fans had become accustomed to seeing over the last couple decades, the Red Sox may have found themselves one of the best bargain signings in all of baseball heading into 2009.

It's no secret that most of Red Sox nation wanted very badly to sign Mark Teixiera during the off-season, but fans should soon realize that they added equally valuable depth to their roster at a fraction of the price. Penny, Saito and Smoltz could very well become important assets to an already strong pitching staff. With the money saved by avoiding high priced free agents, the Red Sox have been able to lock up some of their young talent including Dustin Pedroia and Jon Lester. The strategy of low risk/high reward signings imposed by the Red Sox organization could prove to be exactly what this roster needs heading into 2009.