Theo Epstein Era: Just how good has he been?

Share All sharing options for: Theo Epstein Era: Just how good has he been? 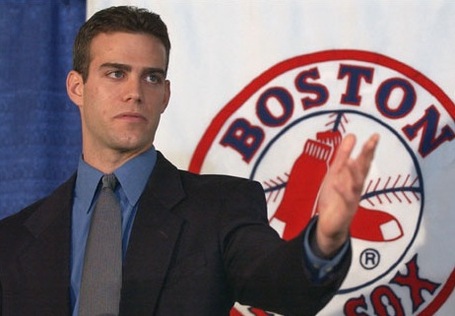 November 25, 2002: A day most Red Sox fans will remember as the beginning of the "Theo Epstein Era" in Boston. Just how good has Theo been in his time with the organization? How much of the success had by the Red Sox over the course of the last six or seven years can be attributed to the Boston native? Well let me try an break that down.

It's no secret that the media's initial reception of Epstein being named to the Red Sox General Manager position was somewhat skeptical in a general sense, and who could blame them? Epstein, a mere 28 years of age at the time, had just become the youngest General Manager in this history of the MLB. Epstein, despite the media's reaction, received very high praise from around the baseball community at the time of time of his inception. Charles Steinberg, who hired Epstein in San Diego, said "This was not your average intern." J.P. Ricciardi saw the potential as well, attempting to name Theo as his assistant GM in Toronto. Epstein however wanted to remain available if the Red Sox ever came calling, and when Larry Lucchino was brought in to the Red Sox, they did. Lucchino himself thought very highly of the young Yale graduate.

"It will be clear to you over time that this is a gifted person with a real opportunity to have a profound impact on this franchise," Lucchino said.

Epstein was a part of the 2004 World Series Championship, but some argued that team was still a blueprint of what his predecessor put together. The same argument could not be made for that 2007 Championship team however. There's not doubt that Epstein has been instrumental in what the Red Sox organization has been able to accomplish during his tenure, let's look at some of his most memorable deals and acquisitions.

Curt Schilling was an important piece of both the 2004 and 2007 World Series titles. As for the other guys? Well the only one in the headlines recently was Brandon Lyon, and that was after giving up four straight home runs to the Red Sox in a Spring Training game earlier this year.

You can't really blame the Minnesota Twins for releasing the big left handed slugger. He could hit the ball a mile, but struggled with strikeouts and was a defensive liability more or less. However, after signing with the Red Sox in 2003, "Big Papi" became a dangerous part of one of the best 3-4 combinations in any lineup in the league, helping to lead the Red Sox to two World Series titles.

Who could forget the day of this move. Garciaparra had become nothing less than an icon to the city of Boston during his time with the team, winning Rookie of the Year and putting up numbers that any shortstop would be jealous of. Epstein felt like the loneliest guy in Boston the night of the deal:

''It was with mixed emotions that we let Nomar go,'' general manager Theo Epstein said after hours of highly complex maneuvering culminated with Garciaparra's sudden departure. ''He's been one of the greatest Red Sox of all time.''

However, the deal would help cement the Red Sox as one of the better defensive teams in the league, providing more depth in the infield. Garciaparra would never go on to have the same success he did in Boston, continuing to battle injuries. This deal proved to be one of the main reasons for the 2004 World Series Championship.

It's also no secret that the young GM has made some questionable moves during his time with the team. And again, this comes with growing at a position like this. Especially with a team like the Boston Red Sox, every move made is done with such scrutiny. It's nearly impossible for every move to pan out, so let's look at a few of Theo's negative moves:

The Red Sox were looking for extra starting pitching. Epstein thought he found his guy in Clement, giving him a 4 year, $40 million dollar deal, which didn't pan out the way he had hoped. Clement went 18-8 with the Sox, but had an ERA that was above 5.00, he struggled with injuries and has not lived up to his contract. A definite miss here.

The Red Sox declined the option to re-sign Orlando Cabrera, opting to shell out big bucks for Edgar Renteria instead. Epstein had been said to have followed Renteria for years before the actual signing, always wanting to sign the shortstop. Although Renteria faired well at the plate during his time with Boston, his struggles in the field and inability to come up with the big hit hurt his reputation with Boston fans.

After getting rid of Mirabelli in a steal previous to this trade (see above), Epstein gave up Bard and a promising young pitcher Cla Merideth to bring the catcher back to Boston in what seemed to some as a panic move. The Red Sox were in desperate need of someone to catch Wakefield's knuckleball, but when you look at what Merideth's upside, it's hard to see this deal as a positive. Merideth has thrown 7 innings so far this spring, striking out 7, walking zero and only allowing 1 hit.

Theo Epstein is still young, but has already drawn comparisons to Billy Beane and J.P. Ricciardi, the General Managers of the Oakland Athletics and Toronto Blue Jays respectively. Both are seen as a a couple of the best GMs in the league. Theo no doubt is deserved of this high praise. In my opinion, Theo Epstein is right up there with these two GMs as some of the top deal makers in the league. If you need convincing, look no further than what Epstein has been able to do with the Red Sox farm system. The Red Sox have set the bar high in terms of developing young talent, something Epstein had been very adamant in doing. With the signings of Dustin Pedroia, Jon Lester, Jacoby Ellsbury, Jonathan Papelbon, Justin Masterson and so on, Epstein has developed a nucleus that will keep the Red Sox competitive for years to come. In this regard, it's hard to find another General Manager who has played such a vital role in their team's success.