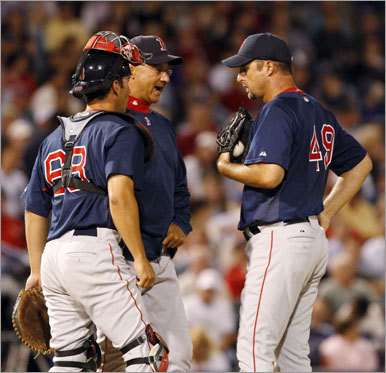 This is very high praise from the veteran Tim Wakefield:

"I'm as comfortable with [George Kottaras] as I was with [Kevin] Cash last year," Wakefield said.

This comes from Wakefield after a solid performance against the Yankees last night in which Kottaras -- his new personal catcher -- was behind the dish. Wake went 5.2 innings, allowed four hits, one run, one walk and struck out five in his best start of the spring. He was also facing the Yankees' projected Opening Day roster.

A sign of things to come? Let's hope so.

Another interesting tidbit is that Kottaras himself called a few knuckleballs that wound up for strikeouts:

Wakefield threw only two fastballs all night and, at Kottaras's request, changed speeds effectively. Wakefield is at his best - and most difficult to catch - when he can toss glacially slow knucklers to go with his merely soft ones.

"He showed a little more assertiveness calling some slow ones," Wakefield said. "I got some strikeouts on some slow ones, mixing in different speeds on his call, not mine."

"It's good, because it gets guys out," Kottaras said. "It was active in the zone, and that's what he's trying to do."

As Terry Francona has said, Kottaras isn't just a normal backup catcher. He has to deal with the only true knuckleballer in the major leagues every fifth day. That's a tough task for a rookie. If he can handle this even half as well as a Kevin Cash or Doug Mirabelli, the Sox should be in a good position.

It might sound extreme, but Kottaras could really make or break this lineup. If he hits anywhere near his line from Pawtucket last year (22 home runs) and catches Wakefield like he did last night, the Sox will be in a phenomenal position.