The Curious Case of Daniel Bard

Share All sharing options for: The Curious Case of Daniel Bard 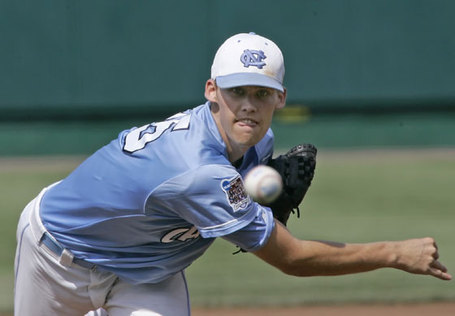 Oh, Daniel Bard. There are so many words to describe you, yet I just can't get them out of my mouth.

If you don't know who Daniel Bard is, his spring stats will speak for themselves:

He's been almost perfect. The 22-year-old reliever has a triple-digit fastball (that'd be 100 m.p.h., folks) and a low-80s slider that just buckles knees on the outside corner. He used to be the modern day Ebby Calvin "Nuke" LaLoosh, with this line describing him perfectly in his early moments in the Red Sox organization:

Some serious shit he has. Yes he does. But here's the question: is he major league-ready?

It's obvious he has the major league stuff, but is he mentally ready for the big leagues? Whether he is or not, Theo Epstein isn't going to give Bard the opportunity right now.

Remember Craig Hansen? He was a lot like Bard. He threw some solid heat and had a nasty slider. Remember what happened when he was promoted too quickly to the majors? Yup. Explosion. He was never the same after that. Now he's a Pittsburgh Pirate and he's doing a lot of the same (he has a 6+ ERA this spring).

Remember a guy named Cla Meredith? Yeah, another reliever that was filthy in the minors that was called up way too soon. He blew up and was then shipped to the San Diego Padres. Luckily for him, he's turned it around and is a pretty solid reliever.

Those two cases alone will make Theo put up the giant red STOP sign and let Bard earn his due in Pawtucket. He hasn't even pitched above AAA before, as his last stop was in AA Portland where he struck out 64 in 49 innings of work. He might start the year at Portland, but if he does he won't be there for long.

So when could we see Bard in the bigs? I wouldn't be surprised if we saw him mid-2009 if there are some injuries. If not then, September is a definite. Can we just imagine a bullpen for a second with Bard inserted in it? Let's take a look at what the most ideal 2009 bullpen would be with Bard in the bigs:

Holy crap. Everyone just take a deep breath and reread the above.

Can you imagine the potential with that bullpen? I mean, I can't even wrap my head around it. This bullpen, even without Bard, is the best bullpen in the majors. With Bard, it could border on one of the best the Red Sox have ever had (I'd dare go even further than that, but won't).

The Red Sox have something very special with Bard but history will not repeat itself. Theo & Co. will bring him up as they need him, but when he gets here ... boy, watch out.