Over the past couple weeks baseball fans across the country were forced to wonder why Ben Sheets, the immensely-talented yet oft-injured starting pitcher, remained unsigned. A few days ago Sheets appeared headed for the top of the Texas Rangers' rotation with a 2-year, incentive laden contract that reportedly guaranteed $10 M. That deal is kaput after a MRI revealed a torn flexor tendon.

Yes, boys and girls, Ben Sheets is once again injured and probably headed to the operating table. 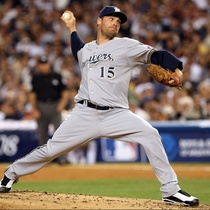