Bloody Sox Laundry - JD Drew is Better Than You

Share All sharing options for: Bloody Sox Laundry - JD Drew is Better Than You

J.D. Drew not getting his due - BostonHerald.com

I love when the media comes to sudden realizations about stuff. I mean, if they talk to Theo, you'd think they'd pick up on more stuff like this, especially when Epstein is so blatant:

Theo: We Ignore RBI In The Front Office - The Joy of Sox

I propose that the n00b test this postseason be mentioning WINZ or RBI as evidence of a player's skill. Agree?

On a related note, I really don't get how people can think JD Drew is worse than Bay. The most obvious difference between the two is their salaries, but that really works against the person who brings it up, simply because Bay is going to join the $10+ million group this coming offseason, and in a much worse economic climate. Combine that with the fact that the current contracts were signed at different points in the careers of the two players, and you can pretty much dismiss that point.

The next argument against JD is that he doesn't hit as many homers. There's no arguing against that fact, but the underlying point that is supposed to be made by it is that JD isn't as good an offensive player. To that, I call BS (not myself).

After the jump, the argument continues, and I finish up with some nice extra links - they're like the sprinkles on a bowl of ice cream. The spicy cinnamon ones that make you forget that you were just shoveling frozen cream down into your mouth fast enough to cause a vision-crossing brain freeze.

I'm going to assume there are readers who aren't up to date on the latest sabermetric stats, so I'll include as many different stats as possible in this comparison. I'll even do it in graph form, in case there's someone else like me who views Jed and graphs in the same light. 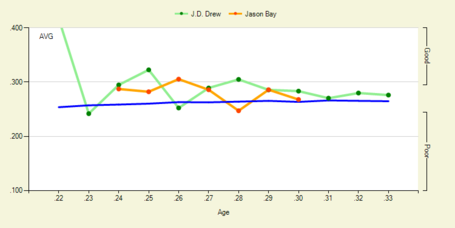 Neither have ever been particularly amazing, but they both appear to end at-bats in either an out or a hit at similar rates. Of course, that really doesn't mean much - walks are basically as valuable as singles, and they take more pitches, on average. So let's look at OBP: 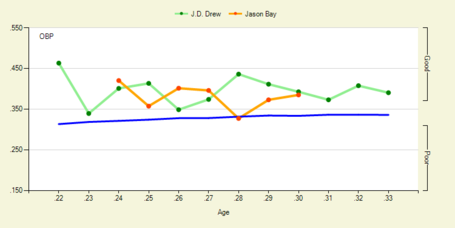 Remember, two years ago, JD's kid was having medical issues for the majority of the season. It would appear to me that JD is at least slightly better than Bay at not making outs, with both being well above average. Now let's see how valuable those hits are, bases wise. 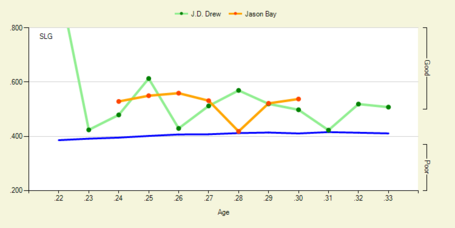 Well, JD's not been very consistent, but we can see that he's probably a little below Bay's ability to reach more bases per AB. Of course, neither OBP or SLG will give us anything close to a complete picture - for that, we can start at OPS.

... Hmm... Fangraphs doesn't have an OPS graph. Perhaps that's because it is beyond imagination that someone could consider the two to be equally valuable? If you must add them, OBP should be given roughly twice the weight (actually closer to 1.7, based on The Book). Doing that gives you a very rough estimate of the stat that I prefer to use to judge a player's offensive abilities, wOBA. If you don't know what that is, I'll wait for you to utilize the closest search engine.

[SB Nation would prefer you direct your browser to Yahoo! at this point]

Back yet? Have a reasonable grasp on what I'm about to talk about? If not, please turn in your Sox gear join your Luddite friends (Sorry, boss). If you do, prepare to be underwhelmed: 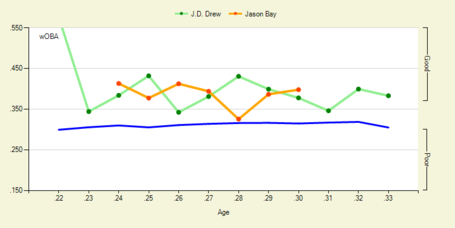 So they've basically been about the same. Not a shock, given that they've been about equal in everything else. Of course, there's the basic fundamentals... 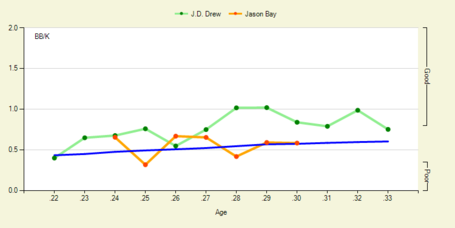 JD's calmer than Bay. Don't you wish they both were a little more outspoken and played with more heart?

JD's been a +6.0 UZR/150 fielder overall for his career, while Bay has been -7.5. (If you want to question UZR, wait a few seconds). Basically, whatever seperation Bay earned through batting, JD more than makes up for as a fielder. This is also the argument for signing Holliday over Bay, given the same chance at either.

Overall, JD Drew is clearly the better player. If you want to argue health, fine, but that's not a skill and that doesn't make him any less talented. Besides, he's managed to compete with Bay in terms of value so far, even in less games.

Back to the links now:

I fear this will lead to questioning wOBA, but hey, I'm not to decide how people interpret the links.

Buchholz is expected to start the third game of the playoffs, scheduled for next weekend at Fenway. It’s a gratifying moment for a pitcher who started the year in the minor leagues, and had to pitch his way into the majors. With only a half-season to prove himself, pitching well enough that the team would anoint him a playoff starter was high on his list of goals. He appears to have achieved it.

Delcarmen in pre-game wreck on I-93 - Clubhouse Insider

Even though MDC had some issues, that would have been tragic.

Who Most Deserved to be Fired this Week? - Beyond the Box Score

CHOICE 4, AND IT'S NOT EVEN CLOSE.

Earliest Sox signing is about a third of the way down. Good resource to compare any new signings to.

Continue the debate about JD and Bay, comment on another link, share your own, or just get hyped for the postseason.