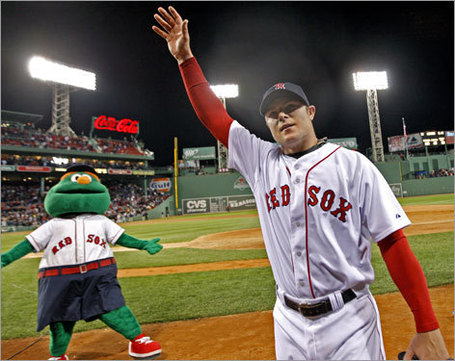 The reason I am writing up No. 2 of the top 10 moments of the 2008 Red Sox season instead of Allen, E-Coli or SoxDevil is because, well, I was dubbed the "biggest Jon Lester fan of the group."

I don't even think that's really true, but there's no question that what Lester did on May 19 is a great moment in Red Sox history.

He had cancer, beat cancer, won a World Series and in 2008 added to his resume by no-hitting the Kansas City Royals on May 19. After the whole cancer hiccup, the no-hitter was just a pretty little cherry on the top of a tasty banana split.

Lester's line was his best as a pro: 9 innings, 9 strikeouts, 2 walks and zero hits. A big, tasty zero. Here's what Allen had to say after the game:

Jon Lester has had his doubters.

I was one of them.

Don't get me wrong. I never felt like Jon Lester couldn't pitch in the big leagues. But Lester was once thought to be the best pitching prospect in a system containing Clay Buchholz, Jonathan Papelbon, Anibal Sanchez, amongst others. And while the first three have distinguished themselves in their own spectacular ways, Lester seemed destined to never really deliver on the promise he showed, rising quickly through the system upon being drafted out of high school in 2002. His stuff, experience, and pitching maturity seemed like they'd never quite come together all at once. Thankfully, the doubters have been proven wrong tonight.

It's easy to compare Lester's no-hitter to Clay Buchholz's in 2007 (which, ironically, was OTM's No. 1 moment in 2007). Both are young pitchers with a lot of potential, but considering the circumstances Lester has battled, his seems just a little more special.

Shortly after the game, I wrote an article about the importance of Lester's no-no:

This no-hitter should be about where Lester is going, not where he has been. Game four of the World Series was Lester's breakout game in my opinion, but it was once again overshadowed by his victory over cancer. While everyone is looking back on what he has done, let's look forward to see what else this young lefty can provide with many more years in the Red Sox rotation.

With or without the no-hitter, Lester was the ace of the of the Red Sox pitching staff in 2008. And let's all remember something: he's going to be 25 next year. We have many, many more good years with one of the best lefties in the American League.