Kids, I was in somewhat dire straits about the Sox around the beginning of July. We looked like S., and that's always magnified when you are playing against your longtime bitterly-hated division rival.

And what happened then? What in Who-ville, they say? 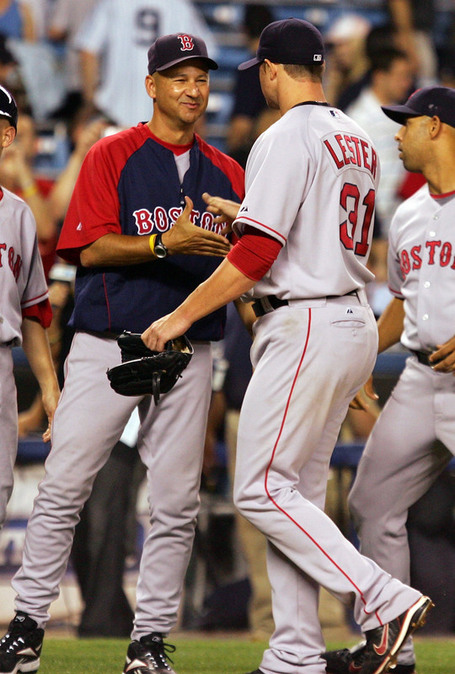 Done with the Dr. Seuss portion. That guy, above, was absolutely phenomenal.

I suppose we shouldn't have been surprised. After all, no less than the man shaking hands with Tito pitched a no-hitter earlier in the season, and he looked incredibly impressive doing that.

But let's face facts about the no-hitter. 1. Kansas City Royals, 12th in the AL in runs and .OBP, were not an offensive juggernaut. 2. At home.

Now those don't make the no-hitter not take place. The odds are generally extremely against no-hitters, even dynamic Tim Lincecum of the San Francisco Giants would have a hard time pitching a no-hitter against his own team's punchless 2008 lineup, with all of those hitters blindfolded.

The point of reminding you those things about the no-hitter are to simply highlight that this shutout was an excellent accomplishment as well, given the situation and the opponent. The Sox BP had been seemingly blowing leads left and right, and the Sox always have a tough time in New York. In addition, the MFYs ended last season 3rd in .OBP, so they would be a particularly difficult team to shutout. No matter. Beyond the first inning, Lester cruised through the Yankees line up as if they were holding wiffle bats and thinking about where to eat after the game.

In addition, the MFY fans are traditionally the toughest critics of Sox players, and I think this game caused many of those aforementioned fans to cast some begrudging respect toward Lester. They'd probably never admit it, of course, but they were impressed and pissed off by the young left-hander who had swept in with his Sox jersey on, all while treating the Yankee Stadium mound like his own stomping grounds.

In short, this game should have made every Sox fan grin like Tito in the photo above.

I said this after the game:

Lester was excellent. We can't be too down on ourselves with him and Becks in the rotation. This is what he's capable of, ladies and gentlemen, and this performance nor his no-hitter were flukes. He's not going to do this every time out, but I feel awesome about Jon Lester taking the mound these days.

Count me among the longer-lasting skeptics of Jon Lester. I was wildly-excited about his no-hitter as anyone else, but we'd been somewhat punked the year before by someone else, and I just didn't want to get my hopes too high about his consistency. The statement above based on this performance probably signified my ultimate abandonment of skepticism about Lester.

My near-rant after the game.