In anticipation of Wednesday's American League Divisional Series opener, Rev Halofan from Halos Heaven and I traded five questions about the ballclubs. Here are Rev's answers to my five tantilizing, earth-shattering questions:

1. The Red Sox know about John Lackey and Ervin Santana, but who is the one pitcher that could burn the Sox and why?


When Joe Saunders is getting curveballs over for strikes, Red Sox Nation is going to wish Tim Donaghy was behind the plate with his money on Mister Yawkey's racial hiring preferences. Teams that don't hit lefties well get overconfident when they finally get a man on base and stop the "take" and try for the "rake" and end up with double play squibbers.

2. If it's a one-run game with the Angles on top, are the Sox doomed or is there a way to topple the mighty Angels bullpen?


The Angels left Justin Speier off the postseason roster, so the only hope is to hope Shields and Frankie cannot find the strike zone and make up your deficit with bases on balls.

3. Which starting pitching match-up are you most worried about and why?


The Angels are hackers and the magic of Dice-K's ability to walk every player on a team's roster is sort of lost on us, so that would be the one where we play into letting his greatest weakness go untested. HE is up agianst Ervin Santana and if the kid's slider gets hit hard, he will serve up fastballs for your hitters to feast on.

4. How does this Angels team rank compared to any in the past 5 years? Does the community in Los Angeles or Anahiem (wherever your team is from) feel that this is the year?

Well, this is the only professional non-hockey team that is actually FROM Los Angeles - The Dodgers moved here, the Rams and Raiders came and went, the Lakers, the Clippers moved here. The consensus is that this is the best team, it is certainly the deepest and easily the healthiest Angels team in the last 5 seasons. The recent postseason drubbings (despite the ALDS victory over the MFY in '05) coupled with the Dodgers also making the postseason this year has lowered the buzz a notch. But you guys know bandwagons better than anyone, it is easy for it to fill up with winning and people are piling on as I type this. 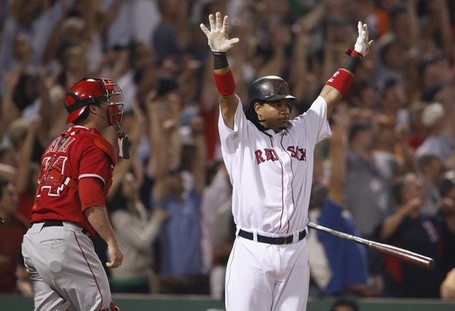 Manny's blast off of Frankie (and Pap-Smear's off of Washburn in 2004) do not even remotely hurt as much as Dave Henderson in 1986, but there were no Red Sox fans back then, just Kevin McHale asking Peter Gammons if the shot clock had run out, but it is nice there are enough of you guys who recall some highlights from last season and still celebrate a player Theo and Larry stabbed in the back.

To read about the ALDS from the perspectives of Angels fans, visit Halos Heaven.