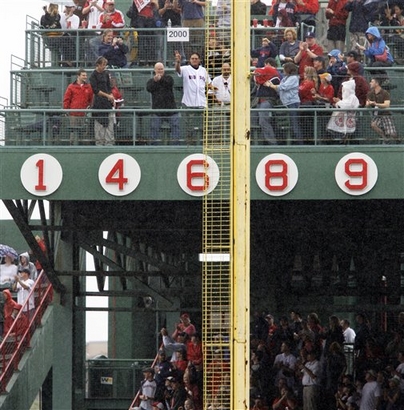 One of the best moments of the season -- and most deserving. (via d.yimg.com)

After battling through every sore shoulder, pulled muscle, numb hand the Baseball Gods could possibley throw their way, the Boston Red Sox finished the 2008 campaign with an impressive 95-67 record.

I don't think anyone expected this after the first month of the season. Curt Schilling went down early and everything seemed to follow. Julio Lugo, JD Drew, Josh Beckett, Daisuke Matsuzaka, David Ortiz and Mike Lowell all missed significant portions of the season (Schilling is done for the year, Lugo we probably won't see in the playoffs).

Yet the Sox battled and beat adversity. Names like Jonathan Van Every and Jeff Bailey popped up out of nowhere and contributed. Players like Kevin Cash and Sean Casey stepped up and produced. It was a season full of ups and downs, but as the playoffs approach the Sox can only be up.

The Red Sox might even have an MVP on their team once results are announced. Dustin Pedroia was great all season long and could earn the honor. No one can argue with these numbers by the scrappy second-year player: .326 batting average, .376 on-base percentage, 17 home runs, 54 doubles, 20-for-21 in stolen bases, Gold Glove-calibur defense and No. 1 in "Biggest Mouth with the Biggest Bite."

His competition may even be his own teammate: Kevin Youkilis. Some will say Youkilis was more important to the Red Sox this year with his 115 runs batted in, but both would get my vote if mine actually meant something. Youkilis -- not Ortiz or the departed Manny Ramirez -- led the Red Sox with 29 home runs. He batted .312 with a .390 on-base percentage. Unlike last season, Youkilis did not tire towards the stretch-run of the season and his stats prove that.

On the mound, Jon Lester was everything we've ever thought he could be. With Beckett battling injuries all season long (and now he has an oblique injury), Lester stepped up to the plate -- well, mound -- and delivered. His 3.21 earned run average helped lead him to 16 wins and 6 losses in 33 games. At just 24 years old, the sky is the limit for the Red Sox's newest addition to the "Big Game Pitcher" category.

Lester had an amazing season, but let's not forget Matsuzaka who some may argue had a better season. Followers here at Over The Monster know Matsuzaka's numbers are a little skewed (or, in reality, should be a lot worse): 18-3 with a 2.90 earned run average. Great numbers, but I can speak for every Red Sox fan when I say we were never really comfortable with Matsuzaka in a game. The problem? Walks. He allowed 94 free passes in 167 innings and, somehow, barely ever got burned. Pitchers around the league curse him for his ability to get into jams and get out of them. Nevertheless, outside of the walks, his stats are gorgeous. One stat that doesn't get mentioned a lot is one he leads the league in: opponent's batting average. His .211 batting average against is tops in baseball, a whole 10 points better than San Francisco's Tim Lincecum (perhaps the NL's Cy Young winner).

Another successful season deserves another pat on the back for manager Terry Francona. Once again, Francona battled through the setbacks and coached this team to the best of his ability. His handling of pitchers and the lineup seemed spot-on for most of the season and I know it won't be any different for the post-season.

A great season that can only get better with 11 victories in the post-season. Go Sox.

(OTM reader Question of the Day: what was your favorite moment of the 2008 season?)