Red Sox Notes: All Over the Place.

Share All sharing options for: Red Sox Notes: All Over the Place.

I've got a lot of random things kicking around my head. 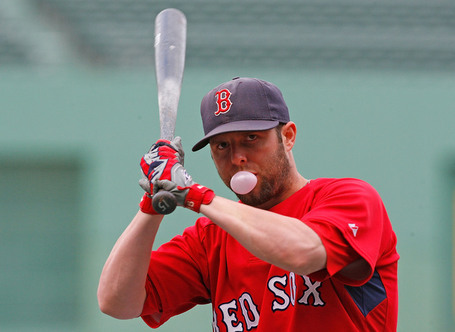 You probably know all or most of the numbers. 54 2Bs. 2 3Bs. 17 HRs. 20 SBs (1 CS). 118 R. 211 H. 123 OPS+. His defense at 2b has been almost impeccable, and he's made it into 156 of 160 games. Dustin Pedroia has an excellent case for MVP of the league. In addition, there's a certain media fascination with him due to both his size and his attitude about the game and himself. Whether that should contribute to MVP balloting or not, it probably has in the past and could this time.

John Donovan and Joe Posnanski weighed in this week on the debate, and both bring up Kevin Youkilis as both an MVP candidate and, thusly, a reason why DP is not the MVP. You can certainly see their point in the numbers. There's not a lot offensively that DP has done that Youks can't or hasn't done. One point needs to be made clear, though I'm probably preaching to the choir in this forum: DP would have 115 RBIs or more himself if he had guys like Drew (.408 OBP), Papi (.370 OBP), "Being" (.398 OBP) and DP himself (.375 OBP) batting ahead of him most of the time, as opposed to Who-Lio, Ells, and Coco. This isn't to disparage Youks at all, but you have my all-encompassing permission to smack the crazy out of anyone who uses the RBI argument to say that Youks has been more valuable this season. The defense argument is bunk, as well, because even if Youks is better than his peers at 1b to a larger degree than DP is to his peers at 2b, 2b is obviously the more difficult position.

With that in mind, we can only hope (for those of us who, even if we don't put a lot of stock in the individual awards, do a good job of faking enragement when things don't go as they should) that Joe Mauer is DP's competition for the award. Not because it makes DP the clear choice, but because Mauer seems pretty deserving himself.

Quite a conundrum here, with Lowell and Drew's statuses up in the air. Have to imagine the roster will be something like:

That makes 24. Last spot would (if Lowell or Drew are not available) go to Chris Carter, Jonathan Van Every, or Gil Velazquez. Perhaps both Timlin and Aardsma would go, though either are perfectly capable of blowing a lead.

I suppose I'm thinking too much about all this, but Bailey is kind of already an all-hit no-field option v. Carter, Van Every would be a defensive replacement or pinch-runner for 4 guys who don't really need such a thing, and Velazquez has 3 minutes of ML experience. I wouldn't mind carrying either Bailey or Carter, because I think both have the ability to hit ML-pitching. I'm sure there'll be plenty of debate between now and when the rosters show up, and I'd appreciate seeing all of your input on the subject. Most likely, in my opinion, Lowell is not available but Drew plays long enough and well enough tomorrow that he's written onto the ALDS roster using a pencil full of hopes and dreams.

Congratulations to him, and the aforementioned Velazquez on making their ML-debuts. I think it's rather interesting that Kottaras (the more highly regarded catching prospect w/r/t hitting) got the call-up rather than Dusty Brown (higher rate stats at Pawtucket with a better defensive reputation). It's not as though either were going to see a lot of PT in September, I suppose.

Eh. That's it. Watch em retire Pesky's number if you can. I've gotta work. I'll admit it's petty, but I'd be totally down with us spoiling Mussina's bid for 20 wins.