What if NO ONE wins the CF competition?

Share All sharing options for: What if NO ONE wins the CF competition?

As Rotoworld points out, Jacoby has hit pretty terribly thusfar, and Coco Crisp, seemingly, hasn't played since the Carter administration.

I have to disagree with our omnipresent sidebar companion. I don't think it is necessarily doing anything for Tacoby's case that Coco hasn't played in awhile. They're not going to let this kid back into the job, no matter how good he was down the stretch last season. It's already been speculated here and elsewhere that the Sox would need to see quite a bit from Ellsbury unless Crisp is traded: they don't need any kind of distraction that Crisp might be, and his value would only get lower as he sees more time riding the pine. ...moving right along

Adding to our happy spring training news is this load of crap. We've got plenty of time, but nothing about Buchholz, McCracken, or Snyder should be causing anyone to stand up and cheer. Is it awful that I'm becoming more and more ready to see what Bartolo Colon can do?

They're gone, to be "replaced" by a new Coca-Cola section of upper-deck seats. Dan Lamothe of Red Sox Monster is feeling nostalgic. Allan Wood of Joy of Sox would qualify as a little less than nostalgic.

No news there, just wanted to get a dig in with a quote I'm pulling from a recent, well, I guess he can call it a "column":

Bet you spoiled newbies have no idea that the 2001 Seattle Mariners were eliminated by the Yankees in the playoffs after winning 116 regular-season games.
"Newbies" are about the only kind of Sox fans that still tolerate him on a daily basis. ZING!

I once saw something cuter than this. Okay, I'm lying. 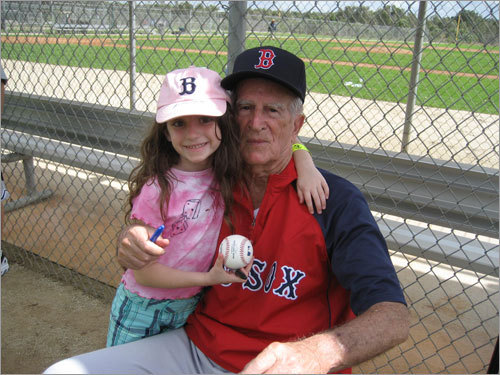