How about some Spring Training positivity?

Share All sharing options for: How about some Spring Training positivity?

Aight. As you can tell, I do realize that there was a bit of negativity in my most recent post. I apologize. When things don't go well for the Sox, I can admit to being less than pleased. But I will admit that I have glossed over or ignored some positive stories of the spring. Well, no longer.

I haven't heard anything about him defensively this spring; maybe I've missed it. If I have, please let me know in the comments or by e-mail. That being said, (SSS alert), he's been phenomenal on the offensive side of the game. In 10 PAs: 2 BB, 5 H, 2 2B, HR. Again, an extremely small sample, but it gives me some hope that if 'Tek should miss some time, it won't necessarily be the Mirabelli and Cash show at the plate.

Competition for the last bullpen slot.

Some have already stamped their tickets to AAA or outright releases, true. But Brian Corey, David Aardsma and even Craig Breslow (despite 7 BB in 4 1/3) have all performed, and all would lend certain qualities to the bullpen. My guess is Aardsma, who might've been the non-Hansen favorite to begin with, basically needs to shoot himself in the foot to lose the spot at this point. What I'm hoping, however, is that the Sox will still look closely at the other two if Javier Lopez can't get back to being a serviceable LOOGY. Absolutely no need to carry one if he can't do his job, though it would definitely be nice if he could.

Hideki Okajima just keeps plugging along. He has yet to be scored upon this spring, and by all accounts I've read, hasn't even debuted his new pitch yet.

Okay, this isn't the Red Sox and barely baseball, but I went to Memphis this weekend to take in a Grizzlies-Celtics game. The Celtics absolutely destroyed the Grizzlies (unsurprisingly), but it was still great to see. Neither team really let up on the gas (aside from switching to almost entirely bench players on either side) even when the game was well in hand for the C's.

We also went by AutoZone Park, where the Memphis Redbirds play. It definitely lived up to its reputation of being the most expensive MiL park in America. It's beautiful, and really, we only saw the outside. I might try to get down sometime this season to see a game; it seems incredible. You can get your own glimpse of AutoZone Park when MLB holds its second annual Civil Rights Game this season, White Sox v. Mets on March 29th.

Thanks to my Dad for taking me to the game, and thanks to you all for putting up with a bit of a diversionary note amidst the ST news.

Another bonus of AutoZone Park is its completion allowed the city of Memphis to demolish their former MiL park which was named after frequent ear-sore Tim McCarver.

And, we close with a picture of Daisuke putting on sunscreen/accidentally blinding himself. 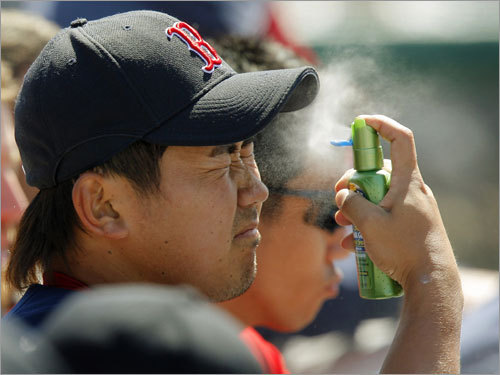