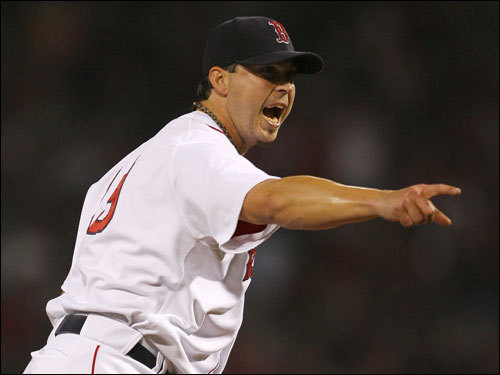 Josh Beckett gesticulates. Such an odd sight from him.

It would not be unfair to say that Josh Beckett's first season in a Red Sox uniform was not terrific. 36 HRs and 74 BB = not great for a starting pitcher.

As kind of pretty bad as Josh Beckett's first season was, he was just as pretty good/excellent in his second season. In short, for most of 2007, Josh Beckett imposed his will on the unlucky hitters of MLB.

20 wins, a 1.141 WHIP, and 194 Ks are numbers any starting pitcher would be proud of. They earned him a second place finish to deserving Cy Young winner C.C. Sabathia, and helped the Sox take their first division title in 382 years. But as amazing as his sophomore effort in Boston proved to be, it was nothing as compared to his first start for the Sox in the postseason.

I don't like the Angels. Really, it probably has a lot to do with our SBN sister site. I make no apologies or excuses for this. However, I can't say that it didn't make this game, and the ultimate result of the series, just a little bit sweeter.

But if you saw the game, you know it goes much further than that. Beckett looked effortless the entire way through. His delivery was smooth, he was composed but as always, supremely confident, and there was never a doubt how the game would go from the beginning.

And of course, this game would start a string of competition-destroying for Josh Beckett in the postseason. In total:

The other impact this game had was semi-indirect. I know I was not NEARLY the only member of RSN who thought, before Game 5 that Josh Beckett could keep the Clevelands down, and change the momentum of the ALCS. And the rest, really became history.

What's left to say? Just this: 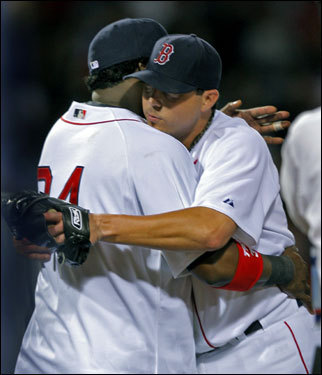