Share All sharing options for: Sox visit the White House It was a cool moment for the Red Sox today as they headed to Washington, D.C. to meet President George W. Bush:

Slugger David Ortiz, an odd sight in eyeglasses, carried the World Series trophy into the ceremony. Captain Jason Varitek presented Bush with a Red Sox jersey that read "Bush" on the back with the number "07."

Among those missing from the proceedings was Manny Ramirez, whose absence was noted by Bush.

This afternoon, Bush also joked about Jonathan Papelbon's famous Riverdance playoff celebration, in which he danced on the field wearing only his underwear.

"And how about Jonathan Papelbon," Bush said. "Guy pitches as well as he dances. And I appreciate the dress code. Thanks for wearing pants."

On a more serious note, the president referred to Red Sox pitcher Jon Lester's successful battle against cancer as an inspiration to many people. Lester began the 2007 season on a rehab minor league assignment, but recovered and won Game 4 of the World Series against the Colorado Rockies.

Does anyone else think this picture could be ripped straight from Pulp Fiction? 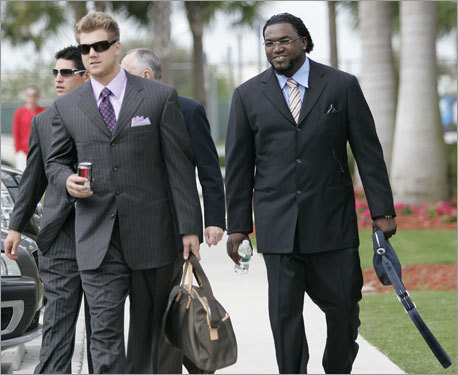