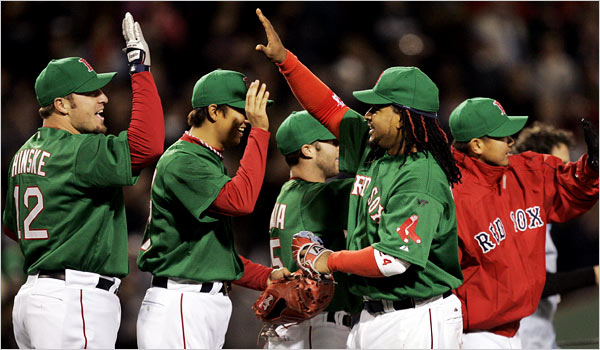 "I'm willing to be a hero in the dark." -Hideki Okajima

Obviously, there were a lot of great moments in the 2007 season. None, perhaps, was more of a 'surprise' than the performance of Hideki Okajima. He began the year as an unknown, and I don't think he or the Sox were quite sure as to what his role would be. He was overshadowed by his countryman, Daisuke Mastsuzaka, and I doubt anyone had him penciled in as "primary setup man", especially after his first outing resulted in a solo HR off the bat of Royals' catcher John Buck.

After that, however, he proceeded to hold the opposition scoreless for almost two entire months. But it wasn't until this game, of all games, that really brought him front and center in the eyes of Sox fans.

For much of the game, it did not seem like it would need "saving". The Yankees had the lead 6-2, heading into the bottom of the 8th, and it seemed as though an important homestand against our bitter rivals would start off with a loss.

Our offense, however, was not done. Yankees' manager Joe Torre decided to play the matchups with David Ortiz coming to the plate, and elected to send Mike Myers to the mound. A lined 2B to CF later, and Luis Vizcaino was entering the game. Vizcaino walked "Being", got Drew to groundout (though both runners moved up), and then allowed an RBI 1B to Mike Lowell. Exit Vizcaino, with one out in the 8th, two on, and the score now 6-3.

Now, generally, we have to feel better than most teams about facing Rivera. The familiarity and our history of getting to him as much as anyone ever has was enough reason to have some confidence. But, he remains Mariano Rivera. And despite a shaky start to the season, I know I didn't feel ultra-confident, especially with the hitters' due up ('Tek was hitting pretty poorly at the time, Coco's OBS was a robust .520, and despite his early-season success, Alex Cora was still Alex Cora). It felt impossible. To be honest, I almost expected 'Tek to roll one over, inning over.

Obviously, he didn't. Single, triple, single, and the Sox had taken the lead against the best closer I've ever seen. There was magic. There was celebration. And yet, there was still the 9th inning, and someone had to pitch.

Paps' return to the pen came with some careful consideration as to his use. He had closed the previous two games, and the Sox were not going to put him on the mound three games in a row. They turned to Oki, and all we could do was watch, wait, and pray.

Oki started out by getting a GB from Jeter, 4-3. Then, Bobby Abreu worked a walk. In a tough at-bat against Alex Rodriguez, Oki was able to get him to line to 2B. After getting Kevin Thompson to strike out swinging, it was all over but the pandemonium.

Instead of starting the weekend out with the loss, the Sox were able to set the tone with this comeback, and the emergence of an unlikely hero (one who would appear in all three games of this series). We would, of course, sweep this series, culminating in some HR hijinx on Sunday.

Box Score
Some bits from Edes