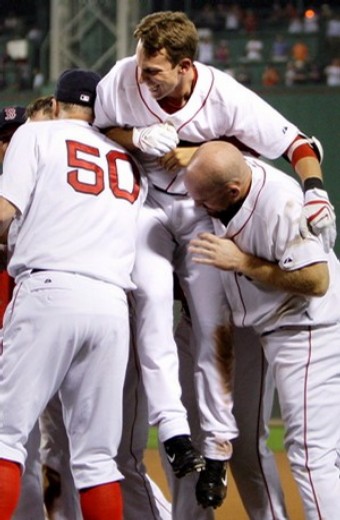 It's safe to say that the first day of August dawned with a number of conflicting feelings for Red Sox fans. I'm going to sell myself out as a big softy by telling you that I nearly considering crying for a few seconds. It was a potentially dark day.

Franchise icon and all-around paragon of focus, Manuel Ramirez, had been traded the day before to a baseball club in Los Angeles, whose fans were so lacking in seething intensity that they'd hadn't stormed the stadium and kidnapped Andruw Jones yet.

The point is, life with Manny Ramirez had been predictably unpredictable for at least 4-76 years with "Being" in the fold, with no idea how life would be without him. Even those holding the torches and pitchforks on his way out of town, no doubt, had a few seconds pause about trading a certain Hall of Famer for a guy who played in a city where baseball is only a vague rumor whispered at Heinz Field in the fall. 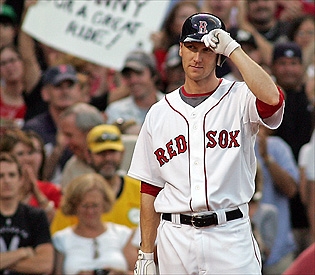 In any event, August 1st dawned as the Jason Bay era in Boston, and if you had no misgivings about the change, then my guess is that you're probably a Reds, Royals, or Tigers fan or something. How would Bay react to actual fans in one of the most historic ballparks in baseball, as opposed to strategically-placed cardboard cutouts and state-of-the-art animatronic humans in one of the most beautiful modern ballparks in the country/world?

In any case, Bay was not our only concern among the position players. Lowrie had taken over for Julio Lugo not too long before this day as well, and he was still finding his way as a player and as a hitter in the bigs. So of course, in true sports cliche fashion, these two would combine to enable an extra-inning walkoff win against the A's on the very day after the "Being" trade.

Both played well the entire game, with Bay making an excellent sliding catch that his predecessor almost certainly wouldn't have, and reached base 4 times in 6 plate appearances, including a rather crucial 3B. Lowrie played both ss and 3b in the game, and went 2 for 4 with a sacrifice and a sacrifice fly.

However, despite our two heroes efforts in the first several innings, the Sox were tied 1-1 with the A's after Okajima coughed up the tying home run in the 8th. The game progressed to the 12th, in which Mike Timlin? turned in a scoreless inning. Former Sox Alan Embree got two quick outs in the 12th before Jason Bay tripled. The A's opted to intentionally walk clutch assassin J.D. Drew in favor of facing rookie Jed Lowrie. Lowrie promptly hit a walkoff infield single to end the game in stunning fashion for the Sox, leading to the scene depicted in the banner photo.

OTM's Thread (With lineups, which should serve to remind you just how silly it was/is to bat even a healthy Lowell in the 4-spot over Bay.)

Randy tells it like it is. (And gets a little bit gushy? I kid.)