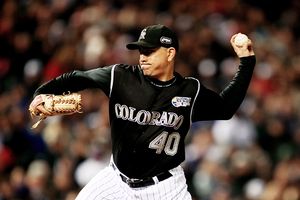 So in the wake of not signing Teixeira, (btw: interesting take on the Yankees and money on BTF) many overreacted and apparently decided we should spend some or all of the money earmarked for Tex somewhere, and this guy was suggested as a recipient of some of that money.

I'm going to ignore a few possible assumptions about Brian Fuentes for the time being.

1. He wants to close

3. He'd be worth giving up our first pick in the draft.

In other words, let's look at this as purely a cost-benefit scenario for the Sox.

In 2008, Fuentes was actually 5th among qualified RPs in FIP, behind two other guys questionable to repeat such performances (Grant Balfour, Hong-Chih Kuo) and two guys who've been among the standard setters for RPs the last few years (one for much longer: Mariano Rivera and Paps). Great company to be in, right? Balfour and Kuo COULD be one-year wonders, but their performances in 2008 were certainly excellent. With Fuentes, however, we've got a bit of history to go on regarding how long he's been considered among closers/premier RPs.

With regard to FIP, his company in 2007 included pitchers like Jamie Walker, Oscar Villarreal, Chad Cordero, and Chris Bootcheck amongst others. Not an "awful" reliever in the bunch, but not exactly premier talent either. 2006? Scott Proctor, John Grabow, Hector Carrasco, Chad Paronto, and Bill Bray amongst others. Again. We're not talking anyone who's going to kill your bullpen, certainly no absolute gas cans in the mix. And his first season as closer, 2005? Michael Wuertz, Jeff Fassero, Doug Brocail, Derrick Turnbow, Akinori Otsuka and Roberto Hernandez.

It's not as though the team that signs Fuentes is going to have a timebomb on their hands: it's that they probably should've just signed Bobby Howry or Jeremy Affeldt a long time ago for less. It's not as though the Mets wouldn't be better off health-wise with Fuentes, it's that if you want dominance from the position, you're much better off with K-Rod and his eventual TJ surgery bill, with Putz as a very viable insurance option.

The point is, even as a setup man, Fuentes will get, at least, mid-tier closer money and length. He's simply not worth it, so let's just ignore him until he eventually, hopefully, signs with someone else.

Now, let's add in a couple of those assumptions I dismissed earlier.

And maybe he should be able to. There are certainly contenders or near-contenders for whom he'd be an improvement over their closer situation. However, the Sox have three relievers (Oki, MDC, Ramirez) who would likely be within spitting distance of Fuentes's results closing if Paps does go down with injury. He also might sign and acknowledge that he'd be taking a backseat to Paps, but he could be disappointed with a role as the secondary LH setup man.

3. He'd be worth giving up our first pick in the draft.

I hope this helped clear things up for anyone who still wants Brian Fuentes, Red Sox RP, to become a reality.