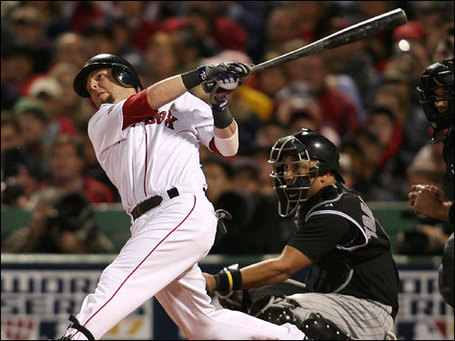 Take a moment and do me a favor. Think of the best clean-up hitters in Red Sox history. Who's your No. 1 guy? You probably didn't think of the guy shown above, but maybe you should.

The 5'9" second baseman was argueably the best player in baseball this season, taking home the 2008 AL Most Valuable Player. He had one of the best seasons ever for a second baseman but there was one point that really catapulted him to the top: Aug. 30 to Sept. 3.

That period of time was when Red Sox coach Terry Francona decided to put little Dustin Pedroia into the clean-up spot in the lineup, instead of the normal two-hole. In his four games as the clean-up hitter for the Red Sox, the results were just awesome:

All from a guy that needs a booster seat to drive his Cadillac Escalade (that's just a guess on my part).

It was only four games (with an appearance at the two-hole in between) but it speaks volumes about what kind of player Pedroia is. Not many players can be thrusted into the most pivotal part of the lineup -- a spot in the lineup he's never hit in before -- and succeed. He went further than succeeding and proceeded to kill.

Pedroia could have just pulled an 0'fer in his few games in his position and we wouldn't have said much about it. I mean, could we blame him had he not played well in the clean-up spot? We couldn't. But if he did go hitless, do you think he would still be the 2008 AL MVP? Maybe, but I think this demonstration gave him a huge push going into September and making his MVP run.

Since Pedroia has the biggest mouth this side of the Mississippi, you think he talked this up for awhile? Think he gloated to everyone in the clubhouse how big bad Pedroia could outhit Manny Ramirez or Kevin Youkilis in the four-hole? Yeah, I'd put money on that.

Ahh, Scrappy Doo. Gotta' love the guy. And now we get to watch him for at least another six years. It's going to be fun.