Could Kottaras and Brown do the job?

Share All sharing options for: Could Kottaras and Brown do the job? 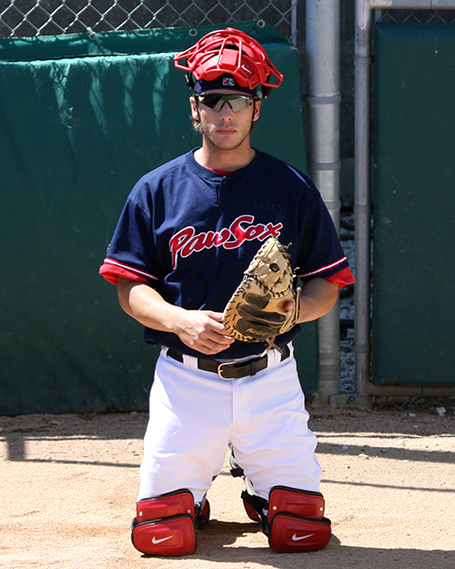 There is only one thing every Red Sox fan can be sure about this offseason: there is a giant hole behind the plate.

Not a literal hole, of course, but a hole left by Jason Varitek who is currently a free agent. Now we can't write off Varitek to come back to Boston, but right now it looks bleak with agent Scott Boras by his side.

Red Sox catcher Dusty Brown.But for the case of an argument, let's say Varitek does not re-sign with the Red Sox. Who does that leave us with on the roster? George Kottaras and Dusty Brown, the two most major league-ready catchers the Sox have at Triple-A Pawtucket. It's scary to think that that combo may be our catchers next season, but would it really be that bad?

The biggest downside to both Kottaras and Brown is their experience at the ML level. That would be none. Or, to be exact, five at-bats Kottaras has on his resume from late last season. No major league baseball team is going to be comfortable throwing a catcher (or two, in this case) with no experience right into the starting job to begin a season.

Let's get to know Kottaras and Brown a little bit better though. Here are their stats from Pawtucket in 2008, where they split time behind the plate:

Statistically, Kottaras and Brown have their similarities and differences. Kottaras is more of a powerhouse catcher that can hit home runs and get on base at a good clip. Brown, on the other end, makes better contact, as evidence by his .290 batting average. Brown is no slouch with 12 home runs in 297 at-bats, though. All things considered, Kottaras is probably the better hitter of the two.

For an even better idea of both players, here are SoxProspects.com's scouting reports of each:

KOTTARAS
Offensive-minded catcher with 20-25 home run power potential and good plate discipline. However, his patience at the plate has led to leaving his bat on his shoulder a bit too much. Takes advantage of mistake pitches. Doesn't make contact on a consistent-enough basis. Has been somewhat pull-happy historically. Behind the plate, Kottaras' glove skills have been called into question in the past, including his ability to throw out runners, his game calling ability, and his basic fundamentals. However, he's a very hard worker and takes to developmental coaching well, and as such his skills have improved during his time in the Sox system. His game calling ability has certainly improved, as the PawSox staff has grown very comfortable with Kottaras behind the dish. On the other hand, while his arm is strong, his throwing motion still lacks quickness, and he only throws about 20% of runners out. Good at blocking balls in the dirt, and gets to bunts and fly balls well. Has extended experience catching knuckleballers.

BROWN:
Brown is an excellent defensive catcher with an exceptionally strong arm. Works well with the pitchers and calls a solid game. Decent bat, gap power and average-to-above-average plate discipline. Somewhat of a streaky hitter. Well built, strong lower body. Athletic for a catcher, but still not going to be a threat on the basepaths. Tough as nails. Brown has the makings of a great backup catcher at the MLB level, and if he can keep improving with the bat, might even get a chance to start at some point.

Defensively, Brown gets the edge over Kottaras. SP.com says Brown is an "excellent defensive catcher," but he didn't have the greatest season behind the dish at Pawtucket. Brown allowed eight errors for a .985 fielding percentage. However, having catchers split time so significantly can't possibly help players behind the plate to feel comfortable. I have to believe Brown struggled not being the every day catcher.

Kottaras allowed two errors for a .992 fielding percentage last year. However, his suspect arm only caught 15 of 80 base stealers. Brown caught 27 of 100 total attempts.

What we have here is two major league-ready catchers that are pretty much polar opposites: Kottaras is the hitter, Brown is the slick glove man. So how do we utilize them? We put them together and see how it works.

While this isn't my ideal situation (ideal: sign Varitek, trade for Jarrod Saltalamacchia), I'm not opposed to it either. Invite both to spring training and let them duke it out for the starting job. It would be great competition and allow them to push each other to make them better.

If Kottaras wins the job, then we have a pretty good bat in the lineup -- definitely a bat better than Varitek's last year. With Kottaras starting, Brown would be able to catch every five games or so and be a good defensive replacement late in games if need-be.

If Brown wins the job, then we have a pretty good defensive catcher in the every day lineup -- not to mention, his bat would most likely be better than Varitek's last year. Kottaras would provide some pop off the bench as well play every fifth day or so.

(And if you missed it, both would most likely hit better than Varitek last year. If you didn't see that the first time ... or second time.)

What do the Sox have to lose? If they don't sign Varitek and aren't willing to trade Clay Buchholz for a young catcher, I don't think the Sox are in that bad of a position. This is certainly a better scenario than having only one major league ready catcher.

A potential downside is how the catchers would handle the pitching staff. Varitek has always been great at managing his pitchers, so I wouldn't expect any replacement to pick up where he left off. We all have to realize that it if Varitek isn't the starting catcher then no matter what the new catcher won't handle the staff as well. Bottom line.

I'm willing to take this shot and see what Kottaras and Brown could do in the big leagues. It gives the Sox even more of a reason to save money and spend it on some pitching if they'd prefer (not to mention, keep Buchholz). It's a cheap option for the Sox that might work out really well.