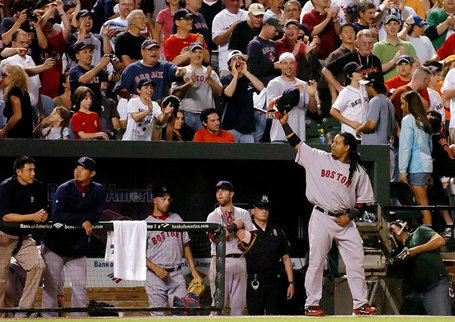 Manny thanks the crowd after his 500th home run. (via newengland.comcastsportsnet.com)

It was a home run for the ages.

On May 31 in a game against the Orioles, former Sox reliever Chad Bradford delivered a pitch in the seventh inning to Manny that he absolutely crushed.

"As soon as I hit it, I knew it was gone," Ramirez said after the game. "So I was happy to move on."

It was a long time coming at that. Manny struggled to hit the milestone through the months of April and May. It was a milestone that was obviously on the back of his mind as well ("Now I can go and have fun"). But what is 500? Allen explains after it all happened:

But what is 500? It's a reason. It's a reason to celebrate all things Manny. Since he's come to Boston, he's done nothing but hit. There are many large FA contracts handed out in the modern era of baseball, and you'd have to say that of those players, Manny is one of few who has really met expectations.

Manny obviously didn't last much longer as a Red Sox. On July 31 he was traded to the Dodgers, bringing in Jason Bay from Pittsburgh to be his replacement. Manny had a lot of amazing moments as a Red Sox, but him hitting No. 500 will be right towards the top of the list.

Red Sox Nation's feelings towards Manny have definitely been sour since the trade (and, well, a while before the trade) but it's important to remember what Manny actually did for the Sox. While he caused headaches, he was also hitting bombs and helping the Red Sox win two World Series. No matter what we feel about Manny Ramirez now, we always need to remember one thing about the future Hall of Famer:

Manny was a bad, bad man.