At the time, we were actually one run ahead, though we eventually lost the game. The stage is set: inning 4, @ Baltimore, Sox ahead 1-0 with Jon Lester on the mound. 1 out, 2 runners on, and Kevin Millar at the plate. He probably looked a lot like this: 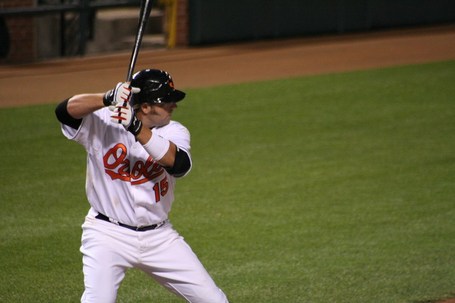 Millar hit a deep drive to LF, one which we probably all believed was either going out or off the wall to score at least the tying run. "Being" comes in, seemingly out of nowhere (and didn't he always seem like that) to catch the ball at the wall. He also did something else: 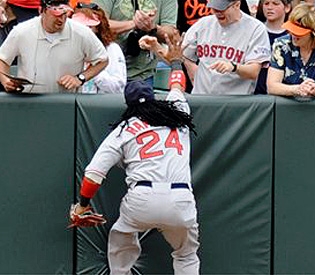 As "Being"'s momentum carried him to the wall, the Boston fan in the front row, seen above, got a high five from "Being" before he came down to the ground and threw the ball into DP, who relayed the ball to Youks to double off Aubrey Huff at first.

Now, the play itself was terrific, robbing a near HR and turning it into a double play. The high-five, however, catapults it into being extremely notable.

Anyone remember the footage NESN, ESPN, etc. showed of players crowding around the nearest camera in the dugout to watch the footage? Lowell looked like he was going to piss himself, in particular. It certainly made everyone laugh. And yet, because it was "Being", it wasn't entirely unexpected.

That's really some of the best about Manuel in a Red Sox uniform, and it's how, unless he decides to don pinstripes, we should remember him in my opinion. It was absolutely time for him to go, but he provided us with plenty of entertainment and a lot of excellent and clutch hitting. And that's the number 9 moment of '08.

My thoughts on an otherwise depressing series in Baltimore.