Share All sharing options for: Top 10 of '08: Honorable Mentions 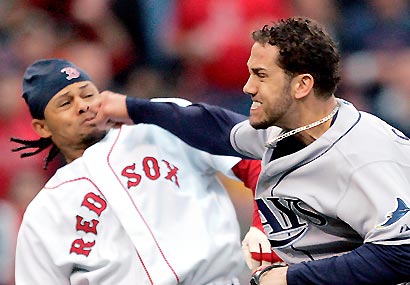 Coco "Neo" Crisp dodging Shields' fist of furry. This is an honorable mention in OTM's top 10 Red Sox moments of the year. (via d.yimg.com)

While the hot stove continues to sizzle, we here at Over The Monster are going to start our second annual top 10 Red Sox moments of the year. Starting today with honorable mentions, continuing every weekday until we're done, we're going to rank the best moments in Beantown this season. Make sure to follow each post to see where your favorite moment landed!

Jon Lester, without a doubt, was the Red Sox's ace this season. Every ace needs his start, and this game was it for Lester. He allowed one hit, four walks and no runs over eight innings in a 1-0 win over the Jays' Roy Halladay. Lester didn't get the win, but this was his first step towards greatness this season. Allen covered the game afterwards:

Lester, however, went toe-to-toe with CG artist Roy Halladay and emerged the victor no decisioner. ... Like (Clay Buchholz) Buch, we'll just have to see if some of this carries over to his next couple starts before making any kind of long-term judgments.

Who's going to forget what happened between Coco Crisp and James Shields? Shields throws a tight one, Crisp doesn't like it and charges the mound. Shields throw a right hook, but Coco goes all Matrix on him and dodges it. That's when the big, old touch Rays gang up on Crisp and start pounding him on the ground. Stay classy, Tampa Bay.

Ah, the saga that was Manny Ramirez. What a wonderful day that was, huh? I remember when the deadline hit and everyone was reporting that no trade had occurred ... but wait. Something had happened and Manny ended up as a Dodger. The trade brought us Jason Bay and I don't think anyone is regretting the move (at least, I'm not). This is my long-winded response a few hours after the trade:

I think all the fans in Red Sox Nation are really going to like Jason Bay. Yeah, he's no Manny (everyone will say that), but he's a damn good baseball player. And he's got the right attitude, which is one of the best parts of this deal. We're never going to hear, "Jason being Jason" and that's a good thing. Jason, like JD Drew or Bill Mueller is a professional that goes about his job the way he's supposed to. No antics (although I wouldn't be opposed to a high-five double play once in awhile).

This moment may not be a top 10, but it's well deserved. Everyone knew Pesky's number should be retired, but no one knew if it would actually happen. The Red Sox do have some standards for retiring numbers, including being a member of the Hall of Fame, but they broke their own rule for Pesky. Rightfully so. Congrats, Johnny.

Opening Day is always fun, but when it's in Japan, it's good a whole different vibe. The Sox split the series with Oakland and I'm not quite sure if we can call the trip a success or not, but at least it was fun. The first game of the season was a 10-inning thriller thanks to Ramirez and Brandon Moss. Moss hit a solo home run in the 9th to tie the game and allow the Sox to eventually win the thing. Oh, and the game started before most people in New England were awake. Some comments of the game:

What else is there to say about this game? The Red Sox kept the game close despite a few bad innings and were able to put it away thanks to some clutch hitting.

I know one thing: I never want to be this stressed at 9 a.m. ever again.