You've always wondered, "How can I do it? How can I turn off my brain and turn up the decibels? How can I join the raucous mob that swarms New York and hangs off every word of the New York Post?"

Well, wonder no longer. Because thanks to this exclusive offer, you can try my new book JETER GOOD! A-ROD BAD!, risk free for thirty days. Call 1-800-SUCKERS today.

In my "award-winning" book, you'll learn the art of the stereotypical Yankee fan. Specifically, that's the art of throwing bodily excretions at a canvas and claiming the resulting specimen is not only inspired, but also worth $80 million over 5 years with a no-trade contract. You'll also learn how to portray yourself as the stereotypical Yankee fan online, in chapter 17. For your exclusive benefit, I'm reprinting that chapter here, at no charge.

Do you want to read a FREE chapter of my new book?

Do you want to learn all the Inner Secrets of Outer Yankeedom?

Are you tired of Rhetorical Questions, and eager to see the Chapter? 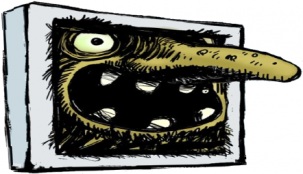 You TRUE YANKEE, You TROLL! via sincontratiempo.files.wordpress.com

As a TRUE YANKEE FAN, you have certain rights and responsibilities online. To be precise, you have the Right and the Responsibility to be Wrong and Irresponsible on internet message boards. You must do the following:

1. Type in CAPS. AT ALL TIMES.
By typing in caps AT ALL TIMES YOU LET EVERYONE KNOW HOW AWESOME YOU ARE AND HOW VALID YOUR OPINION IS.

2. Never use punctuation.
Punctuation was invented by evil, literate Red Sox fans. As we discussed in chapter five - Screaming at the Top of Your Lungs, for Fun and Profit - TRUE YANKEE FANS in public are not quiet, and they rarely pause to draw breath. As you recall from that chapter, the Legendary Banshee of Ireland was actually the first Yankee fan, wailing its plight for not having a team to watch, or a Jeter to worship. Punctuation is a cruel respite from the glory and emotionality of TRUE YANKEE FANDOM, which is why no TRUE YANKEE FAN in human histroy has ever used it.

3. Hair is the enemy.
Clean-cut players always win. Ignore Manny Ramirez, Bronson Arroyo, or anyone who has ever played for the Oakland Athletics. Short hair = victory.

For an example of these see this brilliant, incisive piece from pinstripealley.com:

CASHMAN GO GET TEIXIERA MAKE HIM A YANKEE

Note JUMBOHAWK's superb use of Moronic Hexameter, also known as the complete lack of structure, to bind the piece together. Truly breathtaking. For more on that see Chapter 19 "TRUE YANKEE FAN Books. With Pictures!!1!" (page 22).

Of course, JUMBOHAWK omitted the most crucial thing in a Yankee post, which is

4) To profess your undying love to DEREK JETER, GODHEAD OF MAJESTY AND REPRESENTATION OF ALL THAT IS RIGHT IN THE UNIVERSE, AND FURTHERMORE ENEMY OF A-ROD THE MOST UNCLEAN, while verbally smiting A-ROD THE DECEIVER, PRINCE OF LIES, AND FALSE YANKEE.

5) Go forth and spread your wisdom into the blogosphere, and let not the enemies cries of "TROLL" dissuade your holy quest.

Also be sure to check out the rules of internet trade discussion, covered in Chapter 40 (page 44) "LETS TRADE MELKY FOR JOHAN SANTANA AND DAVID WRIGHT!"

There. You may now pick up the pieces of your blown mind, and exit the ride to your left. Having read a chapter for ABSOLUTELY FREE, are you ready to experience THE WHOLE THING?!!

For a mere $171, paid over 7 months, you can get my 50 page book, featuring "award-winning" illustrations on MS Paint. Buy now, and I'll include my special "Making Of" Audiobook, ABSOLUTELY FREE. It features over 17 hours of exclusive interviews, chapter commentary, and other BEHIND THE SCENES action in JETER GOOD, A-ROD BAD. Call 1-800-SUCKERS today!!!1!!

Will you buy my book?