BREAKING NEWS: Sox to Turn Back the Clocks

Share All sharing options for: BREAKING NEWS: Sox to Turn Back the Clocks

By the Aggravated Press 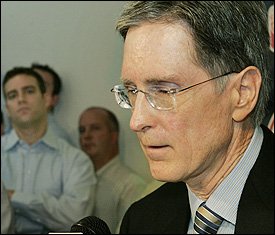 Boston, MA - Red Sox officials called an impromptu press conference yesterday evening to address the future of the organization. A tearful John Henry vowed the team would "return to its roots" and "start losing again."

"When Tom, Larry and I took over ownership of the Boston Red Sox, it was regarded as a team of lovable losers," Henry said. "But in a few short years, we've managed to create a playoff juggernaut. Somehow, though, we lost our way."

"It's time to return to our roots - the days before the Idiots... The good old days. The days when the sun came up, the air was fresh, and the Red Sox weren't playing in October," he told the assembled reporters. "We will start losing again."

Although the exact cause of the organization's change of heart is unclear, Larry Lucchino a reliable source in the Front Office indicated that ownership was moved by a piece in the Chicago Tribune. The article, written by noted reporter Chris Borrelli, discussed the corrosive effect of repeated postseason victory on the soul of the Boston Red Sox and its fanbase.

Initial reaction from the blogosphere was excited. Blogger 0157H7, one of the most respected voices in the Red Sox community, expressed shock and surprise.

"This is a monumental decision. It will shake the team to its core, but ultimately I think it was the right thing to do," 0157H7 said, as he switched off World of Warcraft and turned to face this reporter, his face pale in the dim light of his mother's basement.

"We were taking too much flak from other fan bases. It was getting ridiculous," he added, his corpulent body wriggling as he stuffed more processed food down his mouth.

Members of the press were also stunned. "I've been waiting for this day my entire life," said Dan Shaughnessy, as he walked down the streets of Boston, kicking dogs and pilfering candy from babies. "I'm not quite sure how to react. I think I'll write another angry column."

Theo Epstein appeared excited by the change. "Frankly, creating a winning team is a little too easy," he said. "We could win another five or six World Series with our current squad. The real challenge is rebuilding our team to lose both games and fans."

Epstein announced some personnel changes, including the hiring of a new manager. "Tito's been great for our team, but we need a manager who imparts a new philosophy. Someone who encourages running into extra outs, hacking away at pitches outside the strike zone, and sending out relievers who can't keep games tied," Epstein asserted. "Thankfully, Mike Scioscia was available."

"After winning so often, it'll be hard to change courses," Epstein said. "However we have a good model to follow, in Brian Cashman's Yankees. Given their $200 million payroll and history of failure, it'll be hard to lose more games than they do initially. But with hard work and innovation, I'm sure we'll be able to miss the postseason eventually."

In the clubhouse, players were also surprised by the team's new philosophy. Kevin Youkilis, asked to comment on the goal of losing 90 games, said "Huh?" He then threw his bat twenty feet.