Share All sharing options for: Angels down Sox, 5-4, in 12 innings 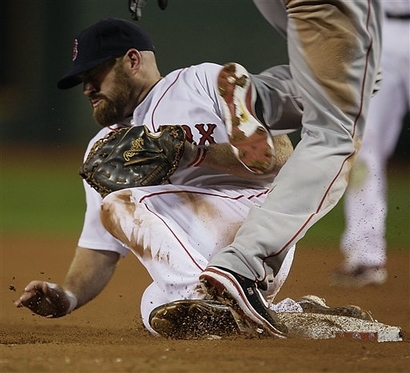 I'll say it: that sucked.

I'm not going to say the Red Sox sucked, though. Josh Beckett, coming off an injury, did all he could. He wasn't the postseason Beckett we know and love, but he gutted it out. What sucks is that the Sox had the opportunity to end this series in a clean sweep and didn't happen. Now a game four is forced and, if the Angels win it, we have to deal with the rally monkey again.

None of you want that. I know you.

Not a lot went wrong tonight. The Red sox didn't look terrible. The bottom line is, this guy hit way too many home runs. Two too many, actually. If it wasn't for him, the Sox could have won this game.

I must give credit to the Angels, though. They didn't quit. They could have packed their bags with Beckett on the mound but they played like the team they looked like all season long. They fought. It's admirable. They're a professional baseball team and the played like it. Congrats.

Now all eyes turn to Jon Lester. Can he do it again? It will be hard, to say the least, for him to be as good as he was in game one. It's certainly possible, but the deck is stacked against him. The Angels have seen him once and have watched the video every day since then. He can do it, but he has to be even better.

The thing that hurts about this game is that the Red Sox were so close to winning this game. They didn't get blown out. It was attainable in innings one through 12. One clutch hit was all it was going to take. It just didn't happen.

Big props to the bullpen tonight. Javier Lopez, the fifth option out of the 'pen, blew the tie game in extras. But, as we all know, J-Lo isn't that great. He's good at what he does -- facing one or two batters -- but outside of that he struggles. I would have liked to see Paul Byrd in that situation, but I understand Terry Francona's choice in Lopez.

The series is extended one more game, unfortunately. But I don't think the Sox have lost any steam heading into game four. It's still theirs to take and with Lester going I'm sure everyone has confidence.