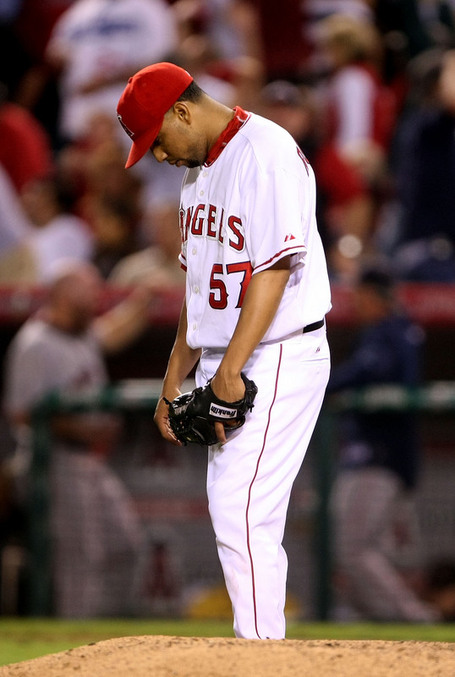 K-Rod after JD Drew's home run in the ninth inning. (via d.yimg.com) 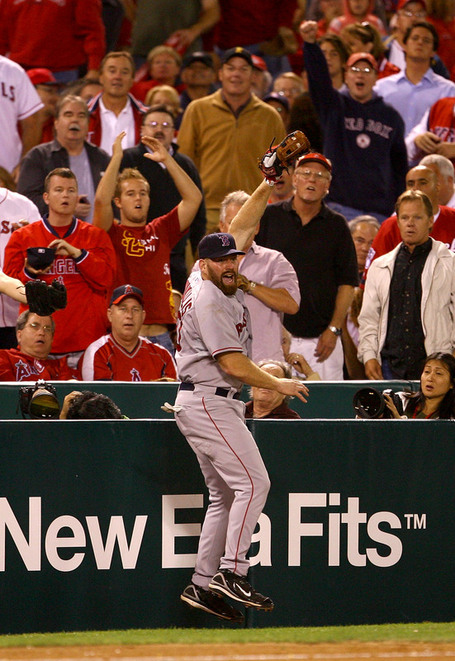 Youk reacts after his great ninth inning catch. (via d.yimg.com) 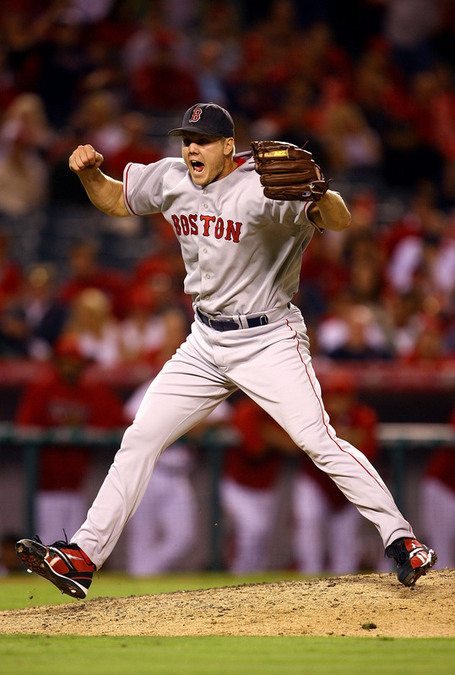 Paps being Paps. (via d.yimg.com)

Games like this seperate the champions from everyone else.

After the Red Sox took a 4-0 lead in the first inning, the Angels clawed back and tied the game at 5-5 through eight innings. In the top of the ninth with pinch-runner Coco Crisp at second base and Francisco Rodriguez on the mound, JD Drew hit a home run to center field that put a dagger through Angels fans all across California.

7-5, Red Sox. But more importantly it's 2-0 Red Sox in the series. The Sox are heading back to Boston to try and put the final touches on the ALDS.

Good teams win games, but great teams win tight games. The Sox showed that tonight. They didn't quit. Even when the momentum was sucked out of their sails late in the game, they just came out and did what they had to do to win this game.

They could have just quit -- that would have been easy. They could have walked to the plate, looked at one of the best closers in the game today standing on the mound and already say the game was over. But they didn't. That's why this team is great. No matter what the circumstances, they know they can win any ballgame.

Compare this to the Angels after Drew's home run. They all looked dead in the dugout. With two outs, Howie Kendrick walked to the plate and didn't even look like he wanted to waste the energy swinging. Vladimir Guerrero sat on the bench wondering how much longer it'd be until he could wrap his knees in ice.

That isn't the Sox. The Sox wanted to win this game.

But back to Drew. Drew, who had only four at-bats in the entire month of September, said after the game he still feels stiff late in the games -- but he didn't show it. He took the 2-2 offering from Rodriguez and simply deposited over the right centerfield fence. He waited for his pitch and launched it.

All I can say is this: what a great hitter.

I would have loved to see Drew healthy the entire season. If he had been, I honestly believe he would have been named the AL's Most Value Player after the season. He proved tonight (3 for 5, 2 runs, 3 RBI) why the Sox invested the type of money they did into him. He is a professional hitter, a class act and one of the finest all around ball players the Boston franchise has seen.

Now take the paragraph above and substitute "Jason Bay" for Drew references. After homering in the first game, Bay hit a three-run shot in the first inning of this one to put the Sox up early. It was absolutely huge because it set the tone for the rest of the game. He's 5 for 9 in the series with two home runs. Now he's heading back to Boston -- where he's obviously more comfortable -- and we should just see more of the same.

Daisuke Matsuzaka wasn't great, but he was good enough (5 IP, 8 H, 3 ER, 3 BB, 5 SO). It kept the Sox on top and against an offense like that, it is really important. I'm sure Matsuzaka wasn't happy with his performance, but the important thing is the end result. His five innings of work didn't help Boston's bullpen, though (Hideki Okajima worked the 6th, Justin Masterson the 7th/8th, and Jonathan Papelbon for the 8th/9th).

Papelbon pitched amazing. He gets credited for a blown save (the biggest crock in the world -- Masterson gave up a leadoff triple and Papelbon let up the sac fly) but also earned the win. He clinched the final six outs, which included a strikeout of Kendrick to end the game. Classic Paps. (The ninth also included Kevin Youkilis making a great catch in foul territory where he had to jump and reach over the photographers' well to make the play).

Now the series swings to Boston and Josh Beckett. Do you think Beckett wants to close the door on this series? He's going to pitch like his hair is on fire.

I hope the Angels are ready for it.