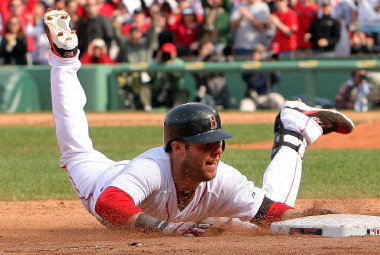 If you've noticed the fanshots by bsetcetera lately, you know there've been a lot of rumors and news about the Sox flying around thusfar in the offseason. I'm less than impressed by the quality of those tidbits (as opposed to the impressive tenacity displayed by bsetcetera in linking these rumors). Let's take them one by one, shall we?

Unlike my esteemed diseased colleague, ecoli, I'm not wild about the idea of A.J. Burnett. He's going to cost a lot in years and dollars, and this article about Derek Lowe makes me think he'd be the better bet both in performance and health despite their differences in age and workloads. And this is anecdotal at best, but he seems like the kind of guy whose dedication isn't exactly consistent from week-to-week.

If the previous paragraph doesn't tip you off, I'm not against signing Derek Lowe this offseason. I realize that there were very real "makeup" questions in his last couple seasons in Boston, and certainly he and the FO should be on the same page as far as those are concerned. However, if a consensus can be reached on that, then a 3-4 year deal for money in the low-to-mid teens almost seems prudent, even given our current economical situation.

Jason Varitek to the Tigers = HWa?

There are, if not every, many indications that the Tigers want to cut payroll this offseason. Sure, there are some pros for the Tigers in this: among a potential group of Dusty Ryan, Brandon Inge (even though he probably is going to be at 3b next season), and Jason Varitek, I'd be more inclined to want to trust a questionable pitching staff to Varitek. On the other hand, he throws no one out, and he's not going to be cheap, which plays against Detroit's budget concerns.

You'll note I'm not in love with this either. Buch had success with Varitek once, and Daisuke and Beckett are developed enough as pitchers to not need his expertise, such as it is. He and Wake don't work together, and any pitchers we bring in would have shown success elsewhere with other catchers. That only leaves Jon Lester who could be assumed to have some stake or need of Jason Varitek behind the plate from a pitching standpoint. It could be a risk, but I'm inclined to believe that John Farrell and Jon Lester himself are at least as responsible for the steps Jon took this season as Varitek might be. I'm not saying I think he's bad at calling pitches and being a leader on the field. I think he's good at those things. I just don't think he's at all the only person out there who can be good at those things. It'll come down to price and years for me, because I also agree that the other options around are not a hell of a lot better in the short-term.

Don't get me wrong, I think he'd still be a great hitter outside of Coors. He's clearly made strides and separated himself from the other Coors products of the last several years (Garret Atkins, anyone?). The point is, is the difference between he and Jason Bay worth what we'd have to potentially send out with Bay? The answer to that question should invariably be no.

Intriguing. My concern would be the same as everyone's. Is he a Kuroda or an Igawa? Something in-between? He'd be an interesting lower-cost option to Burnett or Lowe. I'm not even sure such signings would be mutually exclusive.

I. Um. S. F. I got nothing. And so much. Let's just say I'm with those in the camp that Mike Lowell's injury does serious damage to his already somewhat questionable trade value. Close the book on that one for now.

Upset about how he was treated in Boston? I'd cry for him, as he clearly expects, but I'm too busy laughing at him. I was sure the link would take me to the Onion or something. I'm upset about my treatment in every city in which I've been violent towards women. I mean, what do fans in those cities expect? I have to get my jollies somehow.