What to expect from Matsuzaka in game two

Share All sharing options for: What to expect from Matsuzaka in game two 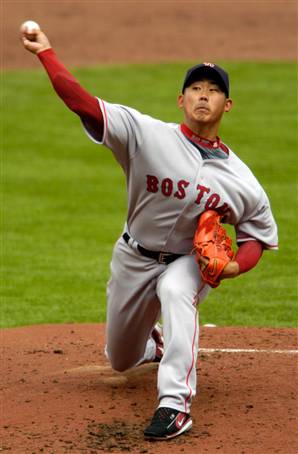 It's no secret: all season long we waited to see when Daisuke Matsuzaka was going to get burned.

He tempted fate all too much. It seemed like two innings couldn't go by before he loaded the bases and, in turn, left them loaded to end an inning. He would walk as many as he struck out but he still rarely ever paid for his mistakes.

That's not what great pitchers do.

But he was great.

Forget the walks, forget the lower number of strikeouts -- because when it mattered, Matsuzaka was at his best. When things got bad, he got great. When things started to look ugly, he kicked it up a notch. Essentially, he was everything we expected.

Of course, we'd like less walks in the future and we'd love to see him strike out more batters. But how can you argue with a league-leading .211 oppossing batting average? And an ERA that was just behind Cliff Lee and Roy Halladay in the American League? And not to mention, a season much better than his first year as a Red Sox.

Tonight will be a big test for Matsuzaka. The Angels are usually a free-swinging team (although we didn't see that in game one) so that should help him, but they are also a dangerous team. If he leaves a fat fastball over the plate for hitters two through eight, it will probably be hit hard.

As we've seen in the past, Matsuzaka is a big game pitcher. He knows how to win ball games. And although we may not be as comfortable when Jon Lester or Josh Beckett is on the mound, I think he'll prove to Red Sox Nation just how good he is.

Will the Sox be up 2-0 when the day is over? If Dice-K is on his game, don't be surprised.