Share All sharing options for: A World Series Pattern 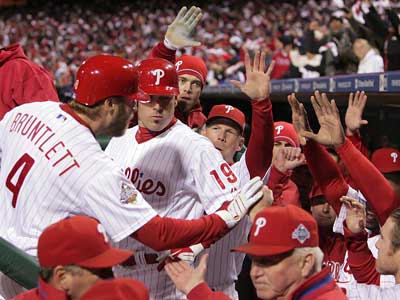 Do you see it? Look closely. Give it a minute. Squinch your eyes up, and look for the sailboat, I mean pattern. Have you found it?

Given this conclusive and indisputable evidence, an immediate solution presents itself: the rest of the league should collude to ensure that a Sox team makes the World Series. To do otherwise is to allow the dreaded prospect of National League Victory. And that, frankly, is un-American. Or at least, un-American League.

To be serious for two sentences, Congratulations to the Phillies and their fans! Your team played well and knocked off a tough foe. Granted, that the clock struck midnight and B.J. Upton, Carlos Pena, and Evan Longoria all turned into pumpkins undoubtedly helped (a combined 8 for 57 in the series, with 1 extra-base hit). Such things happen to Cinderella teams, though.