Share All sharing options for: What's going to happen with Jason Varitek? 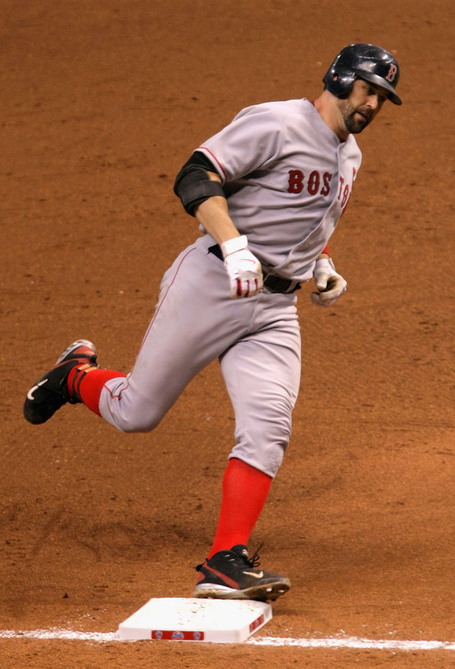 ST PETERSBURG, FL - OCTOBER 18: Jason Varitek #33 of the Boston Red Sox rounds the bases after hitting a solo home run against the Tampa Bay Rays in the sixth inning of game six of the American League Championship Series during the 2008 MLB playoffs on October 18, 2008 at Tropicana Field in St Petersburg, Florida. (Photo by Doug Pensinger/Getty Images - via d.yimg.com)

There's no doubt that the biggest hole the Red Sox face this offseason may just be the most important one: behind the plate. Jason Varitek -- or Captain, if you prefer -- has been the heart of the Red Sox for many seasons but his bat, as well, hasn't been there for many seasons.

This year was a career-worse for Varitek. He batted just .220 and slugged a measly .359. He was as close to an automatic out or double play as there was on the 2008 Boston Red Sox.

But at the same time, it hurt. I think I can speak for a lot of Red Sox Nation when I say seeing Varitek struggle as much as he did wasn't the best viewing experience. He's not a normal baseball player -- he's our captain. He's the guy you'd buy a beer for any day of the week just because he's our captain. No doubt he'll go down as one of the greatest Red Sox ever.

Now it's time to look at what we have. Varitek's contract is up and a lot of people want to cut 'Tek loose and try to get a young catcher in the system to, hopefully, mold to become a future Varitek. But what is actually out there for catchers and how bad was Varitek -- comparably to other catchers in the AL?

THE KING OF THE CROP

When we talk about catchers, the best in the league -- without a doubt -- is the Twins' Joe Mauer. In 2008, Mauer batted .328 in 146 games. The next-best batting average for a catcher in the American League was the Rays' Dioner Navarro at .295. A pretty big gap between No. 1 and 2. The White Sox's A.J. Pierzynski slotted in third with a .281 batting average.

Shoppach claims the SLG title with a .517 mark on the season. He was the only catcher with a slugging percentage above .500. Mauer came in second at .451 -- another large drop -- and Ivan Rodriguez, when he was with the Tigers in 82 games, came in at .417.

Shoppach, who filled in for injured Victor Martinez most of the season, was the best powerbat for a catcher in the AL with 21 home runs. The second most home runs came off the bat of the Orioles' Ramon Hernandez (15) and third was a tie between Pierzynski and our own Varitek (13). (NOTE: Mike Napoli for the Angels belted 20 in a short time, but he isn't on this list because he played less than Jeff Mathis).

WHAT DOES IT ALL MEAN?

It means, simply, catchers in the AL aren't that good when it comes to swinging the stick. Mauer is the exception, though, as he's typically in the top of each category and has the potential to show more power later in his career (he will only get better, too). So while the AL has a couple of good ones (Mauer, Navarro) everyone else isn't that good. Managable, really.

Here's how Varitek ranks with AL catchers in these four categories:

Not the best numbers, but he's basically a little below average. Here's how AL catchers average out:

A couple things jump out at me. His home run numbers aren't that bad. They'll probably drop next year, be he was certainly above average. His .220 batting average is really bad, but it wasn't even the worse in the league: Yankees' Jose Molina batted .216 and the Angels' Jeff Mathis hit .194. And when the league average is .254, that still is pretty bad. Slugging is certainly a problem area for Varitek.

If you are looking to replace Varitek with a catcher in the free agent market, keep looking. This year's crop is nothing to get excited about. The complete list, via Cot's Baseball Contracts:

See anything you like? Didn't think so. Is anyone interested in Ivan Rodriguez any more? Maybe if it was 1999 again. I just don't see the Red Sox dipping into a free agency unless they are looking for a third catcher, like a David Ross. Who, of course, was the Red Sox's third catcher late in the season. I actually really like Kevin Cash and would be a little upset if he wasn't our backup catcher in 2009.

This is where people are intrigued. There have been a million and one names listed in trades where the Sox would acquire a young catcher. Names like Jarrod Saltalamachia, Max Ramirez and Taylor Teagarden have been thrown around quite a lot. It seems like everyone but the Sox has some type of catching depth in the minors

It would make sense for the Red Sox to make an off-season move to bring in a young catcher. What team wouldn't like to have a player like Coco Crisp, for example? The Sox have other young players -- players that are on the fringe of the being every day MLBers -- that would compell other teams. It's all about the right recipe, though.

Minors leaguers that is. The Sox have a few young catchers in the system that may be able to replace Varitek in the future, but the question remains if it can be done this season. Most regard Dusty Brown as the top catching prospect in the Sox system, but George Kottaras is still kicking and Jon Still showed a pretty powerful swing last year. I see a future in Brown, but I'm not sure we have a 2009 starting catcher in this crop.

THE CONCLUSION (AT LEAST, FOR NOW)

My conclusion is simple: Jason Varitek had a pretty bad season at the plate, but unless the Sox pull of a big trade then there's not really much else we can do. Varitek is our captain, he's the best game-manager in baseball and he won't be too expensive, so why not? Does his bad offense really hold down everything else he does? Free agency obviously isn't the answer for the Sox.

Perhaps this is the way the Sox will approach this situation: wait on Varitek this offseason or offer him a cheap, short contract right off the bat. And No. 1 priority (behind Mark Teixeira, of course) will be to find a young catcher that could be ready very quickly. Have that young catcher be groomed behind Varitek over the course of the season and, ideally, he'd be ready for 2010.

That's the situation, and I'm sticking to it.