2009, A Domination Oddysey: The Rotation

Share All sharing options for: 2009, A Domination Oddysey: The Rotation

Welcome to part 1 of my comprehensive look at the offseason. Today we begin with the starting rotation. Warning: you may want to ready a torch and pitchfork as you read my suggestions.

The 2008 Red Sox were the best strike-out team in the league (counting the 'pen), and had the 4th best team ERA. Here's the statistical breakdown:

Paul Byrd and Bartolo Colon were about league average. Every minor league call up other than Michael Bowden was awful.

This is highly speculative, but here goes. Lester should regress a little or put up similar numbers. Beckett should improve - his fundamentals were better than his record indicates. Wakefield should decline, both from age and regression to the mean - his FIP (4.94) was high compared to his ERA (4.13). Buchholz should get slightly better, since his stuff is great and it would be hard to pitch worse than he did. Matsuzaka is the biggest question mark, but I'll be pessimistic and say that he won't have such ridiculous luck with runners in scoring position. [With RISP, batters hit .164 / .288 / .288 against Dice-K.]

All told, I would expect slightly worse overall performances from the squad, as Wake, Lester, and Dice-K regress, while Beckett and Clay get only a little better.

My Plan for Success 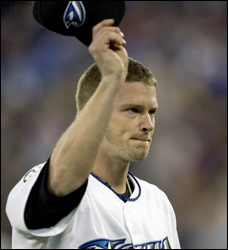 The Red Sox really need to develop Clay at the major league level, and this may require some further suffering on our parts. The same thing happened with Lester. If Clay's struggles seriously impact the team, send him down and bring up Bowden.

See, I told you to prepare the torches and pitchforks. Wakefield has given us good performances for many years, and, as a league-average starter at $4 million, he is a bargain. Besides that, he's a class act and a great guy.

That said, Wake's value declines when he's the 4th starter on the team. With a good Rays team and desperate New York to compete with, we need all the advantage we can get. We could sign a Sabathia or Burnett, and make Wake the 5th starter, but that blocks Buchholz/Bowden, who really need major-league innings. Those young pitchers are both paid the major league minimum, and they have higher ceilings than Wake.

Another factor is that Wake is an abomination in the playoffs. Since 2003, he has a 9.89 ERA in the postseason (23.2 innings). I'd rather have him off the team than losing us games in the postseason.

Swapping Burnett for Wakefield gives us a rotation that can compete with the Rays. It also gives us a power-pitcher who should perform better in the playoffs and who has good career #s at Fenway and against the Yankees. Bowden / Buchholz get some development time in the majors.

Enough of my plans though. What rotation do you want to see next year? Answer the poll and comment below to share your thoughts.

*FIP, aka. Fielding Independent Percentage, is a measure of pitching performance that tries to take defense out of the picture.