Share All sharing options for: Why the Red Sox Won (ALDS Game 1) 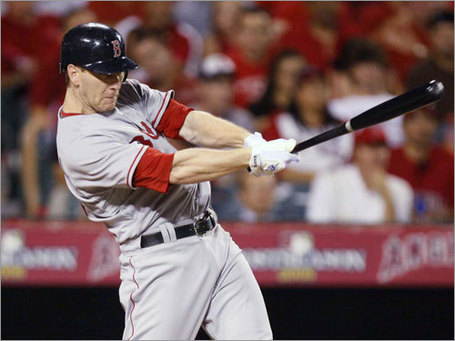 Last night was a great game for Boston. Jon Lester pitched very well, and Jason Bay picked up our offense in a huge way. But more than that, it exposed the chief flaw of the Angels: offense. The Angels' woes last night were in some ways a microcosm of their entire season.

Last year, the Angels limped into the postseason, beset by injuries, and they floundered like a gutted fish, losing in three games by a total score of 19-4. Surprisingly though, they were a better hitting team than the one that stands before us.

Just for fun, here are the same stats for our squad.

What these stats basically tell us is that the 2008 Angels are not an offensive powerhouse, despite the additions of Mark Teixeira and Torii Hunter. They don't put many runners on base, and they don't hit for much power.

How does this tie in to last night's performance? Well, the Angels wracked up 9 hits. None of them went for extra bases. As Jason Bay will happily tell you, it's much easier to drive in runs when you can go deep.

The Red Sox had 12 base runners and 3 extra-base hits, and this was with John Lackey pitching well (and Scott Shields struggling). The Angels had 9 singles and a walk off of Lester, Masterson and Papelbon.

Now going by defense and pitching, the teams are pretty close. The Sox and Angels are 4th and 5th, respectively in the American League in Defensive Efficiency. This is a measure used by Baseball Prospectus for "the rate at which balls put into play are converted into outs." Futhermore, the teams allow opposing batters to score at similar rates. The Red Sox allowed 4.28 runs per game (3rd in the league), and the Angels allowed 4.3 runs per game (5th).

One thing I haven't mentioned is the running game. Last night it was all about Jacoby Ellsbury, who stole two bases, while the Angels' chief running play was Vladimir Guerrero running into an out at 3rd. The two teams both swiped a lot of bags - LAA 129, BOS 120 - but the Sox had a better success rate, 77% to the Angels' 73%.

In a short series like the ALDS almost anything can happen. But if these games stay close, then Boston's superior offense could be the deciding factor.