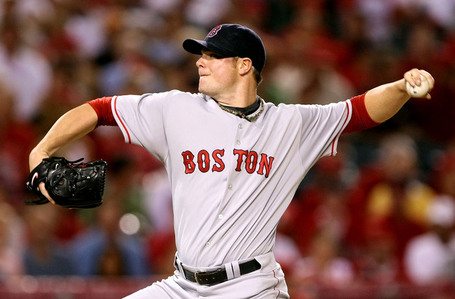 When Red Sox Nation found out that Josh Beckett had an oblique injury and would not start game one of the ALDS against the Angels, people worried. Beckett, probably the greatest postseason pitcher in baseball today, would not set the tone for the series.

But the tone was set, just like people expected Beckett to do. However, it was Jon Lester on the mound. Lester, who won game four of the World Series in 2007, stepped on the hill and you could have sworn he changed his name to Josh.

Lester allowed no earned runs (one unearned) in seven innings of work to earn the win Wednesday against the Angels. He struck out seven, with three of those coming in the bottom of the sixth inning after the Red Sox took the 2-1 lead thanks to a Jason Bay home run. Lester allowed just one walk and six hits.

Bay, on the other hand, didn't look good at the plate before the sixth inning. Angels starter John Lackey dealt Bay a steady dose of curveballs, inducing two strikeouts before the sixth. Just when Lackey decided to throw Bay a fastball, that's when he took advantage with a two-run home run over the left field wall. This was Bay's first postseason game in 771 career games.

The Red Sox padded the lead with two runs in the top of the ninth. After Jed Lowrie singled and Jason Varitek moved him over with a bunt, Jacoby Ellsbury knocked a single to plate Lowrie. Ellsbury stole second and advanced to third on a ground out before David Ortiz knocked him in with a single through the right side of the infield. The Sox went up 4-1 and handed the game off to Jonathan Papelbon to earn the save.

Justin Masterson pitched an eventful eighth inning to bridge the gap to Papelbon. With the heart of the Angels order at the plate and a one-run leading, Terry Francona turned to the rookie to keep the lead intact. Mark Teixeira hit a shallow ball to center field but Ellsbury, who never slowed down, ran in and dived to his left to make the catch.

"I really didn't think he had any chance to catch that ball," Francona said after the game.

Vlad Guerrero followed with a single but wouldn't stay on base for long. Torii Hunter hit a blooper over Kevin Youkilis' head at first base, but he was able to field the ball and throw out Guerrero at third base who tried to stretch the play. Howie Kendrick grounded out to end the inning and the scoring threat.

No matter which way it's sliced, this was a great game for the Red Sox. Lester proved that the World Series in 2007 wasn't a fluke (same goes to the entire 2008 season) and the offense came together against one of the better pitchers in the American League. The lineup was configured perfectly and allowed for the playmakers (Ellsbury, Dustin Pedroia, etc.) to do damage.

The walking wounded faired OK. Mike Lowell didn't look very fresh later in the game, hobbling a little bit. JD Drew, though, looked fine in both the field and at the plate. I wouldn't be surprised to see Lowell sit for game two. Drew should be fine, though.

Now comes a day of rest and the action will start back up friday with Daisuke Matsuzaka taking on Ervin Santana. Most predictions thought the Angels would come out on top tonight, but the Red Sox proved them wrong. For Friday? The Sox are hoping for a repeat of tonight.

(To see how Angels fans are reacting, visit Halos Heaven)