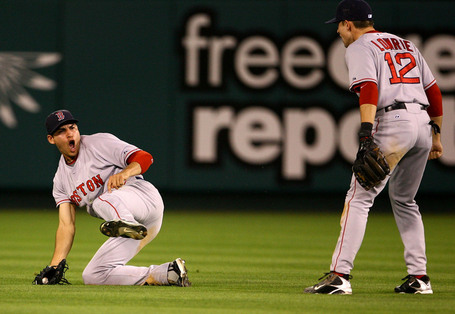 Jacoby Ellsbury asks Jed Lowrie "who's the man?" after an amazing diving catch late in the game. (via d.yimg.com)

Jon Lester and Jason Bay powered the Red Sox to a big 4-1 victory over the Angels in game one of the American League Divisional Series.

Lester was amazing, going seven innings without allowing an earned run. Justin Masterson pitched a scoreless eighth and Jonathan Papelbon struck out the side in the ninth to cap the victory. Jason Bay hit a two-run home run in the sixth inning to give the Sox the lead for good.

Need to breathe? Go ahead. Recap to come up in a little bit.