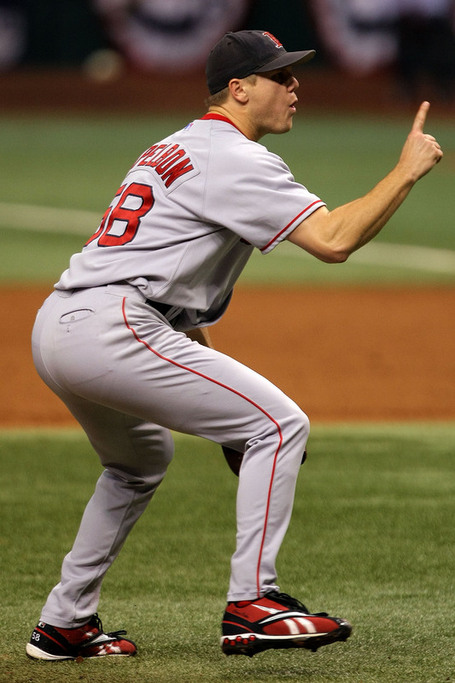 A lot of people gave up when the Red Sox were down 7-0 in the 7th inning of game five. No one then would have guessed the Red Sox would be playing on Sunday in game seven.

Josh Beckett pitched like the stud he is and key hits -- including a Jason Varitek home run -- carried the Red Sox past the Rays, 4-2, Saturday night in St. Petersburg.

Yes, ladies and gentlemen. There will be a game seven played between the Red Sox and Rays.

A lot of people said Beckett should not have started this game. A lot wanted to throw Jon Lester, the unquestionable ace of the 2008 Red Sox staff. I can't say I had an opinion, but for all the doubters: Beckett told you to STFU.

It's OK, that's what he told the Rays tonight, too. Only five innings, but he allowed just two runs (two home runs, actually), four hits, one walk and struck out three. It wasn't Beckett's best postseason performance, but it doesn't matter because he did what he had to do. Two runs in five innings? I'll take that nine times out of 10.

Kevin Youkilis was a stud for the Sox. He belted a home run in the second to tie the game at one after BJ Upton's dinger in the first inning. He followed it up with an RBI in the third to score Dustin Pedroia and give the Sox a 2-1 lead.

In the sixth with a tie game 1-1, the most unlikely player stepped up and made it a new ballgame: Jason Varitek. That is not a typo. Jason Varitek stroked a home run over the right field wall to give the Sox a 3-2 edge, one they wouldn't relinquish.

Varitek is a unique player. Most of the time if you have a player that is horrible at the plate, they will hear it no matter what else they bring to the game. I feel like the entire Red Sox Nation just keeps patting him on the back and saying, "Next time, Buddy. Next time." Well, next time was tonight. He hadn't even had a hit before his home run to give the Sox the lead. Boy, did that feel good -- for everyone.

The unsung hero of this game has to be Hideki Okajima. Okajima came into the sixth inning -- way earlier than he is accustomed to -- and shut down the Rays' offense for two straight innings. His pitches were extremely crisp, hitting the corners of the plate. This looked like the 2007 version of Okajima.

The only flaw I see in tonight's game is the number of men the Red Sox left on base: 17. Bad, bad. This easily could have been a 10 run game with some timely hitting. The Sox really need to pull the trigger with men on base in tomorrow's game.

This, my friends, is the last thing I will say tonight:

"Don't Stop Me Now" by Queen