Game 5 Postgame: Can you believe it?

Share All sharing options for: Game 5 Postgame: Can you believe it? 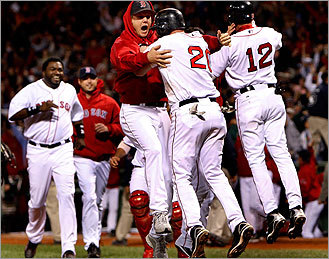 With J.D. Drew's 9th inning double off JP Howell, the Boston Red Sox have completed the greatest comeback in ALCS elimination game history. They were down 7-0 to start the 7th inning.

Then Grant Balfour and Joe Maddon allowed the Sox to get back into the game. David Ortiz found his thunder at the best possible moment, stroking a three-run homer. 7-4.

Papelbon threw a shut-out top of the 8th, setting the stage for Jason Bay and Drew. Bay walked on four pitches from the shaky Wheeler, and Drew unloaded for a huge two-run homer. 7-6. Later, Coco "Clutch" Crisp drove in Mark Kotsay to tie it up. 7-7.

Justin Masterson got through the ninth, with a key double play turned by Pedroia off Carlos Pena's bat. Howell got the first two outs, and had Kevin Youkilis ground out to 3B. But Evan Longoria made a terrible low throw, which bounced into the stands, sending Youk to 2B. Bay was IBBed, setting the stage for the man of the hour - J.D. Drew.

Savor the moment, Sox fans. The bats are back. The sleeper has awakened. And we're coming for you, Tampa.