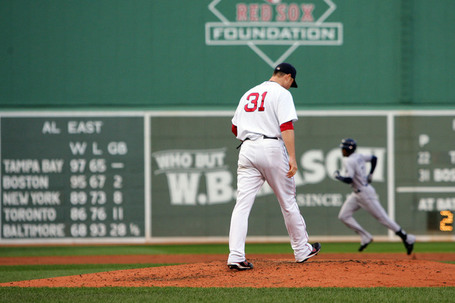 All credit to the Rays.

That being said, we sucked eggs today. Lester wasn't Lester and I'm actually going to give him a pass on this, personally. No, NG, he wasn't sucking momentum. Do you guys remember the last time Lester threw more than 160+ innings in a season? That's right, it was never. If he's hitting a wall w/r/t command, I'm not sure it's something we can blame him for. He certainly didn't look like he was pitching hurt, unlike Becks. Just wasn't locating.

DP rolling into that dp in whatever the f inning it is that I can't bother to look up or remember just pissed me the heck off. Few things piss me off about DP, but trying to get a hit on those low-and-away pitches is one of those things. Wait a bit on that count, DP. We had a run in, and you don't need to just jump on Howell. He didn't look rattled because of the SF to me.

Paul Byrd "saved" the bullpen, so that they'd all be ready to go in case Wake gets pummeled tomorrow. My issue with him coming in today rather than, perhaps, to start the 5th inning of Game 2 is that we were already behind. They had the "NG-copyrighted" momentum before he came in. Yeah, he could come in and keep it close without having to use MDC or Oki or somebody, but a foolish vote of confidence in Becks, truly, is what still bothers the f out of me even after an a-kicking of a Game 3 @ Fenway. This also might mean Byrd couldn't start a possible Game 6 if we get that far. It can't be Becks, and I'm not sure who else it could be. That might not be worth worrying about.

I have about as little faith in Jason Varitek right now as I do in Sean Casey's ability to snag a hot shot down the line at 1b. And yes, that's my roundabout way of saying I continue to be pro Kotsay over Casey.

I wasn't kidding in the thread. Rays: We get 2 outs rather than 3 in our innings, and you let us use DP, Youks, and Bay in the lineup over and over and over. I'm pretty sure we'd have a better shot. Much more balanced in that Rays' lineup.

On the plus side, look. Wake is going in Game 4, and he's absolutely got the ability ot keep the Rays off-balance. Game 5 is Daisuke, who DID keep the Rays off-balance in Game 1. We're not done yet, but the Rays made a huge statement with this game, and I can't remember where I heard it, but whoever said it is absolutely right: I'm among the many Sox fans who penciled in W's for Lester's starts, and this should throw off all those prognostications, a great accomplishment for the Rays.