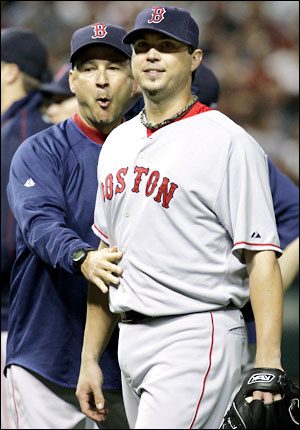 "Let's blow this game, together!" say Josh and Tito. via i.a.cnn.net

What do you call a Josh Beckett playoff start in which the Red Sox score 8 runs?

When your ace starter, one of the best in October, gives up 8 earned runs, your team deserves to lose. But the Sox fought hard against a struggling Scott Kazmir and the vaunted Rays bullpen, scoring 8 runs of their own. They made a monumental effort of it.

While the box score and announcers will tell you that this game was lost in the 11th, the decisive Rays' blow came in the 5th. Beckett, who had struggled through the 4th inning, and had looked shaky all evening, came on for the fifth inning. The Sox had scored 3 in the top of the inning, to make it a precarious 6-5 Red Sox lead.

Beckett began the fifth by striking out Akinori Iwamura, and then walked B.J. Upton (who promptly stole second). Carlos Pena singled to score Upton, and the game was tied.

At this point, Red Sox manager Terry Francona could have gone to the pen. Beckett was getting lit up, and there was no reason to stick with him. But Tito made the critical decision to stick with the starter. Beckett promptly gave up a double to Evan Longoria, giving up the lead and putting two in scoring position. Now that the lead was gone, Tito went to lefty specialist Javier Lopez, who allowed a run-scoring single to Carl Crawford.

Boston battled back in the 6th and 8th innings for individual runs, but were unable to push across a go-ahead run. Mike Timlin came on in the 11th to blow another extra innings game, and that was it.

Anyway, I take solace in the great offense of Kevin Youkilis (HR, 3 for 6), Jason Bay (HR, 2B, 3 for 5), and Dustin Pedroia (2 HR, 3 for 5). Also commendable were the strong performances by our relievers not named Timlin or Lopez:  Masterson, Delcarmen, Okajima, and Papelbon combined for 5.2 scoreless innings.

The Tampa Bay Rays just barely got a split in their highly favorable home stadium. They tagged Beckett for 8 runs, and we still took the game into extra innings. I feel good about our offense and bullpen going forward. Best of all, we can lose Beckett's next game, and Wakefield's, and still win the series, if Lester and Dice-K come through for us. Go Sox!