Share All sharing options for: Matsuzaka shuts down Rays, 2-0 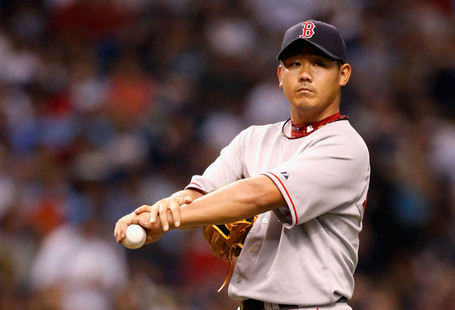 Daisuke Matsuzaka knows when to kick it up a notch. Tonight, with all eyes on him, he did that -- and more.

After walking the bases loaded in the first inning, Matsuzaka buckled down and dominated the Rays for 7 innings to give the Sox a 2-0 victory over the Rays in game one of the ALCS.

Dice-K had a no-hitter going through 6 innings before finally giving up the first to Carl Crawford in the 7th. He allowed the first two base runners in the 8th before he was yanked, but no one can argue with this line: 4 hits, 0 runs, 4 walks and 9 strikeouts.

Simply put: he was amazing. He was what we wanted out of our No. 1 starter in this series.

Offensively, the Sox struggled against Rays starter James Shields. Shields hit his spots but the Sox seemed to adapt. Jed Lowrie hit a sac fly in the fifth to score Jason Bay and give the Sox a 1-0 lead. In the 8th, Kevin Youkilis doubled to score Dustin Pedroia. Youk had 3 hits on the game.

The Sox certainly weren't impressive at the plate, but it was just good enough. Had Dice-K pitched average tonight, the Rays would be up 1-0 in this series. But the Sox offense did what they had to do to win.

Dice-K set the tone just like Jon Lester did in the ALDS. The difference here is the fact we expected that out of Lester, but not Dice-K. We wanted 'good' out of Dice-K tonight but we got 'great.' He delivered like the big game pitcher he is.

The wind had to be knocked out of the Rays' sails after tonight. I think they expected to work Dice-K, get on base, run and get across the plate. But it didn't happen. The momentum has definitely swung in the Red Sox's favor.

Tomorrow it's Josh Beckett versus Scott Kazmir. It should be a great game.