ALCS Preview: Red Sox and Rays -- to the death

Share All sharing options for: ALCS Preview: Red Sox and Rays -- to the death 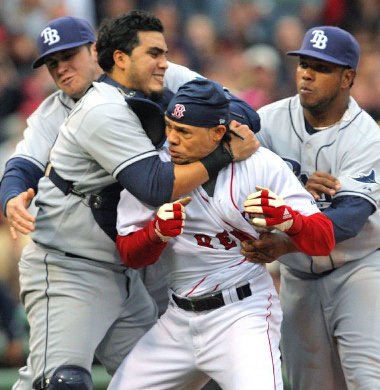 And they meet again.

The Boston Red Sox versus the best team in the American League East, the Tampa Bay Rays. There is no doubt in my mind that this is one of the best ALCS match-ups I've seen in recent history. Something about this rivalry just makes it stand out.

No, it's not Red Sox and Yankees. But it's the Rays -- the Rays -- and the Red Sox. Not a Rays team that is overachieving a little -- they are overachieving big time. But I'm not saying the Rays are a bad team. That's far from the truth. It's just that no one really expected them to be here.

Not this year, at least.

We always knew this Rays team would be nasty in a few years and we seemed to make that statement every year. But did anyone expect it to smack us in the face so face? Did anyone expect the Rays to be the hottest team in baseball come October? No one expected it, but that's what we've got.

Will we see punches traded out on the mound? Probably not. Not at this point of the game. There's too much at risk. Imagine if James Shields blazes a fastball past the chinny-chin-chin of Coco Crisp? The crowd is going to erupt with "Oooooh!"' but I don't think we'll see anything.

This series will come down to the pitching. If the Red Sox starters pitch like they are capable of, the Rays will have a hard time. If the Rays' starters blow up from pressure, the Sox should stroll. But of course, the Rays starters could be absolutely lights out -- like they were all season long -- and frustrate the Sox.

But what we are going to see is going to be a great series. It's like an ol' fashion title bout with everything at stake:

Iiiiiin this corner we have the young, spunky, never-gonna-die-even-if-ya-tryyyyyyy, up and coming, top of the mountaaaaiiiin, fighter of the year ... The Rays!

Iiiiiin this corner we have the defending heavy weight champion of the wooooooooooorld ... the savvy veteran, the still quick-as-a-cat pounder. Before you can call yourself champioooooon, you gotta' beat this guyyyyyyy ... the Red Sox!

It all comes down to this. It's a battle of new vs. old. If the Rays win, the face of baseball will forever be changed. If the Red Sox win, it just proves how good this team is. No matter what though, someone will win. And no matter what, it will be big.