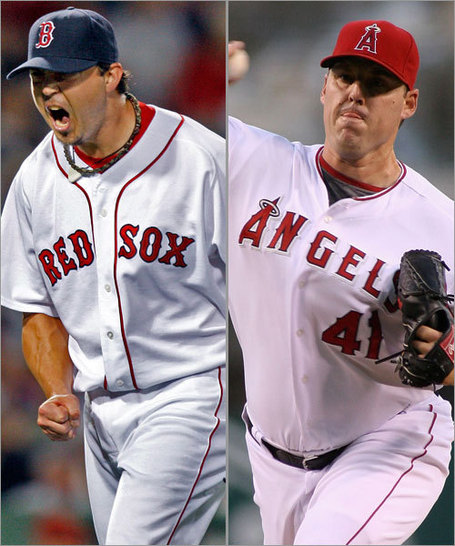 One game out of nine. That's it.

The Red Sox's record against the Angels this season is not something to gloat about. In nine match-ups, the Sox walked away with only one victory and that just happened to be their first game. It was an unlikely win at that: Jacoby Ellsbury homered twice, David Pauley earned the start (one of his two this season) and Mike Timlin earned the win.

It wasn't exactly how it would be drawn up.

But after that is when the slide began. Seven consecutive losses to the Halos did not help the Sox prove that they were playoff worthy. Of course, you have to beat the good teams to win the World Series, right? It was obvious early that the Angels were contenders in the weak American League West but the Sox didn't know their number.

However, it's a different animal now. The Red Sox, who have one two of the last four World Series, have proven to be a different team come the playoffs. And the Angels? They are the opposite: since 2002 (when they actually won the World Series), the Angels have won just four of 16 playoff games and have been swept out of the playoffs twice. They only advanced past the ALDS once and that was against the Yankees in 2005.

So how will it play out this year?

Here are the match-ups for the first three games of the series:

GAME 1: JON LESTER (BOS) @ JOHN LACKEY (LAA), WED.
It's ace versus ace. The Red Sox would have liked to pitch Josh Beckett here, but a recent oblique injury has pushed his start back until game No. 3. Still, Lester has been the Sox's ace the entire 2008 season so he might as well get the nod tonight. Lackey is one of the best pitchers in the game but has a lifetime 5.54 ERA against the Sox. This season he fared better against Boston, but his splits suggest he'd rather be pitching on the road (4.29 ERA on the road, 3.23 at home). This one is likely to be a pitcher's duel.

GAME 2: DAISUKE MATSUZAKA (BOS) @ ERVIN SANTANA (LAA), FRI.
Here's a toss up. Matsuzaka might pitch better than usual because the Angels aren't a patient team and we know how he likes to walk a batter now and then (understatement?). This is a home/away match-up that works for the Sox: Santana at home has a 4+ ERA. Matsuzaka on the road has a 2.37 ERA. If the Angels aren't patient, this one could go the Sox's way.

GAME 3: JOE SAUNDERS (LAA) @ JOSH BECKETT (BOS), SUN.
Don't shoot the messenger, but something tells me that Beckett won't be able to start this game. No hard facts here, but I just have that feeling. If Beckett can't start, it'll be a hard game for the Sox to win. Saunders hasn't been the best pitcher in the Halos' rotation but he is a left-handed pitcher and we know what kind of trouble that could give the Sox. Beckett, though, is the best post-season pitcher in baseball today. If he gets on the field healthy, maybe nothing can stop him.

Games four and five, if necessary, will take place Sunday and Monday.

The waiting is all over now. All we can do is watch some baseball and hope for the best. And, like we know, the post-season is a new season: One out of eight? Doesn't matter anymore.