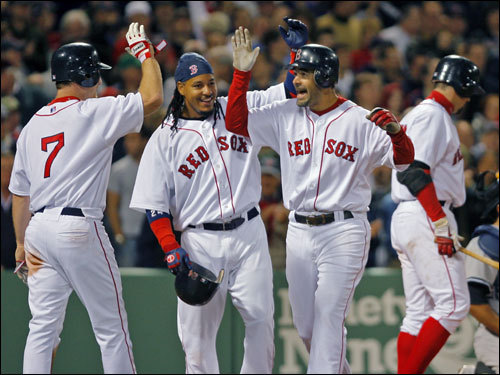 The Fenway Faithful were treated to an event never before witnessed in Fenway Park's 96 historic years: back to back to back to back home runs. It was only the 5th time in Major League history that four consecutive taters were knocked out of the park and it was all the sweeter coming against our arch-rivals, the New York Yankees.

The Red Sox were trailing the New York Yankees 3-0 with rookie hurler Chase Wright on the mound. With two outs and nobody on base, Manny Ramirez stepped to the plate. Manny slumped well into the 2007 season and there was no sense that this was the beginning of a memorable moment. Nevertheless, MBM saw a 2-1 pitch to his liking and sent it far over the wall in left-center for his 2nd bomb of the season. 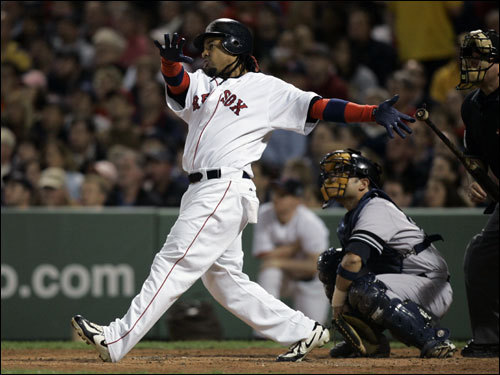 This, folks, is the sweetest swing in baseball
(AP Photo)

J.D. Drew strolled over to home plate. He had been punched out in the first, leaving two men on. With the count 1-2 Drew decided to hit something other than a ground-out to 2B and launched the next pitch over the Red Sox bullpen. It was his 2nd tater of the season and 2nd in Fenway. Back to back homers for the good guys. 3-2, Yankees.

Mike Lowell, in the infancy of a career season, was up next. Lowell cranked a 1-1 pitch high and and Over The Monster. In the words of Bob Ryan, "Hello, Lansdowne Street." It was his second of the season and the 165th of his career. Following back to back to back bombs the score knotted up at 3-3.

Jason Varitek, otherwise known as Captain America, came to bat. Our captain was swinging a hot bat having gone 5-for-8 with a game-tying HR in the previous two games. Varitek didn't need to see more than one pitch. Wright's first pitch reversed course and soared Over The Monster. Sox lead, 4-3. 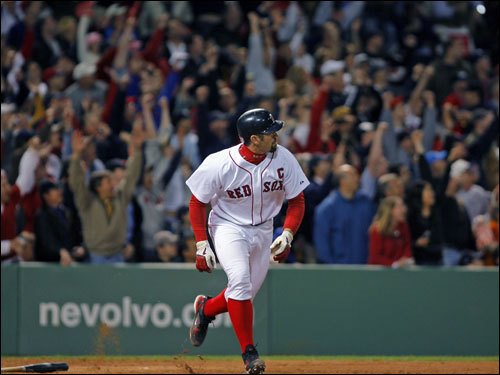 Bob Ryan does a little homework for me here:

The Red Sox won the game 7-6, but not after some drama. The Yankees re-captured the lead, 5-4, after Jeter solo-shot and a "sacrifice" ground-out by Melky Cabrera that scored Cano. Our hero, Mike Lowell, saved the day by hitting his second home run of the night, driving home 2 runs to secure the win for the Red Sox.

I hope most of you saw this monumental feat. It's not likely to happen again any time soon. Thus concludes #6 on our Top 10 moments of 2007.